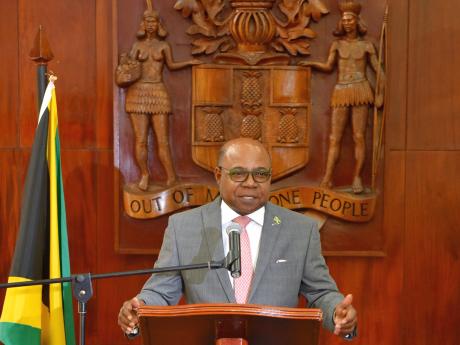 Minister of Tourism, Edmund Bartlett, speaking at the post-Sectoral press briefing at Jamaica House on Wednesday, May 1, 2019 - Contributed photo

Minister of Tourism, Edmund Bartlett, has welcomed the States of Public Emergency that have been imposed in the western parishes of St James, Hanover and Westmoreland.

Speaking at a post-Sectoral press briefing at Jamaica House on Wednesday Bartlett said the enhanced security measures are aimed at further securing the integrity of the destination.

He noted that Jamaica “has maintained a position of being a destination that is safe, and anything which challenges that makes for immediate and proactive action so that Jamaica does not ever get into the position where we are running behind issues that are uncontrollable”.

“Governments that act quickly and proactively to deal with security matters are governments that are securing not just destinations for the visitor but for their own people,” Bartlett added.

The SOEs, announced by Prime Minister Andrew Holness on Tuesday, are aimed at curbing the rise in violent crimes in the parishes, particularly murders.

Data show that between January 1 and April 28 this year, 29 persons were murdered in Westmoreland, 27 in St. James and 18 in Hanover.

Meanwhile, Bartlett said that the SOEs are not expected to have any negative impact on visitor arrivals.

“We had it [SOE] before and it didn’t cause any problem; we grew,” he pointed out, noting that hoteliers have been reporting an increase in repeat visitors.

“We had been boasting of a 42 per cent repeat business,” he said, noting that some properties are reporting figures of up to 50 per cent in repeat customers.