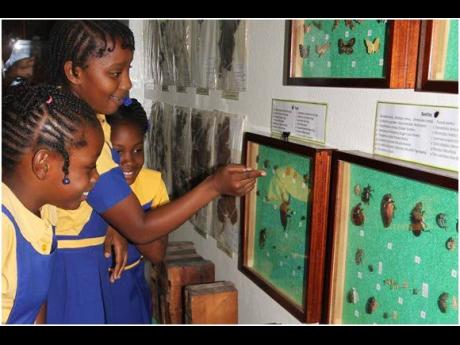 Contributed
Students of Moores Primary and Junior High in Clarendon enjoying the display of plant and animal species at the Natural History Museum of Jamaica. The exhibition will be on display at the museum until June.

THE NATURAL History Museum of Jamaica this week hosted the awards ceremony for its 2019 Earth Day competition, which attracted the participation of 30 schools from across the island.

The schools – made 100 submissions in the various categories – from ‘Literary Arts’ to‘Poster’, ‘Photography’ and ‘Design Model’. There was also a ‘Video’ category which gave contenders the chance to submit a one-minute video of an endemic Jamaican plant or animal species in its natural habitat.

First place in the literary category went to Shyamaleeswari Dayanandan of Immaculate Conception High School. She submitted a poem titled ‘A World We Share’. Michael Harrikissoon of Bustamante High School took second place, also with a poem. His was titled ’A Praise of Doctor Birds’. Third place went to Daniel Bailey of St Mary High School for ‘Killing No More’.

Holy Trinity High dominated the Design Model category, with the three awardees from that institution. Davian Green took first place for his piece ‘Iguana’, followed by Giovanni Clarke in second, with ‘The Little Green Turtle’ and Dwayne Virgo in third with ‘My Giant Tody’.

Kemona Nelson of Cedar Grove Academy won the Poster category with her work ‘Protect Me or Lose Me’ while Shemar Matthews of Bustamante High came in second with ‘Protect the Crocodile’. Keturah Reid of Seaforth High placed third with ‘Menace to Marine Life’.

The Photography category had many well-composed photos from the schools. Sherissa Pinnock of Cedar Grove Academy won this category with her photo ‘Sleeping Beauty’ while Michael Harrikissoon from Bustamante High School came second with ‘Jamaican Twig Anole’. Daniel Thompson,also of Cedar Grove Academy, placed third with his photo, titled ‘Focus on Beauty’.

The Natural History Museum of Jamaica also launched an exhibition in which the students’ work are displayed as well as some of the museum’s preserved endemic species, such as galliwasps, Jamaican iguanas, etc. The exhibition will be on display until June.