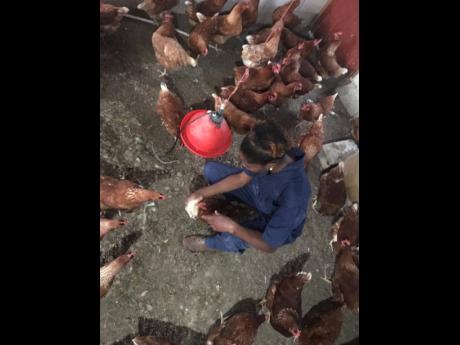 In the hills of St Ann abides a farming community called York Castle, located in Claremont. It is in this same community that Shania Williams is growing, learning, and influencing.

Williams grew up in a family that was not rich and, as a result, her parents placed much importance on education as they knew it was the only way to change their circumstances. Williams attended primary school in her community, York Castle Primary School, before matriculating to Ferncourt High School, where she completed mainly arts-based subjects.

“After high school, I wanted to do law, but when I spoke to the school, they said that teaching would be a better fit,” Williams stated.

She decided to get her teaching qualifications at Moneague College, but said that things were hard after completing her studies.

“I had a good experience at Moneague, but upon graduating, life became difficult because there were no jobs, and when I did work, they were only for short stints of three or four months at a time,” Williams explained.

This hardship led Williams to follow her partner’s advice to start farming as the shipping company he worked for accepted goods from farmers for sale. She wanted to be part of it and started planting sweet peppers. Williams said that farming sweet peppers was too hard, so she came up with the idea of being an egg farmer.

“I really questioned whether or not I could handle being an egg farmer, especially since I did not know much about it,” Williams admitted. “But I asked a friend to help me gather material to build the coop for the layers.”

Even after having the materials for the coop, Williams still second-guessed herself, but later she pulled it together and with the help of her brother, Tavario Williams, she built the coop. The next step was to get chickens for the coop, but Williams was faced with another roadblock.

“I ordered 100 layers, but it was only when I made the order that I found out that you have to order a year in advance,” she said. “God must have been on my side because I got them sooner than expected, and in 2016, I started my business.”

While farming, Williams is furthering her studies to upgrade her diploma to a degree in primary education. In the same breath, she teaches part-time. Her day usually consists of waking up to feed and check on the chickens before going to teach at York Castle Primary School. This is usually followed by classes in Brown’s Town before going back home to take care of the chickens.

“I could not do all of this on my own,” Williams said. “I have to thank my brother because during the days, he is the one who looks after the chickens.”

She explained that as late as February, she faced issues that almost caused her to give up.

“Through the good times and successes, there are moments of disappointment, heartache and regrets,” Williams explained. “In February, I purchased 300 hens, and I was so excited because I could now meet the mounting demands of my customers.”

She was even more excited because having 300 chickens meant that she was also increasing her business.

“When we collected the hens that night, I was overwhelmed, and when I arrived at the farm about 2 that morning, 115 of the birds had died due to the way I had carried them,” she explained.

Williams cried in despair that night, but with encouragement from loved ones and the Bible story about Job, she bounced back. She stated that she now sees these as lessons. You have to go through these to learn to be a better business owner.

Williams also gives back to her community by engaging young ladies in a community netball league, where they sometimes enter competitions.

“The boys have football, they just come together and start up a match, but the girls don’t always have something like that so I came up with the idea to help keep them occupied,” Williams told The Gleaner.

Williams has a lot on her plate, but she manages well with help from her loved ones and her own drive to succeed. In five years, she hopes to have 3,000 hens on her farm. She plans to continue using her creativity to motivate students to become future entrepreneurs.