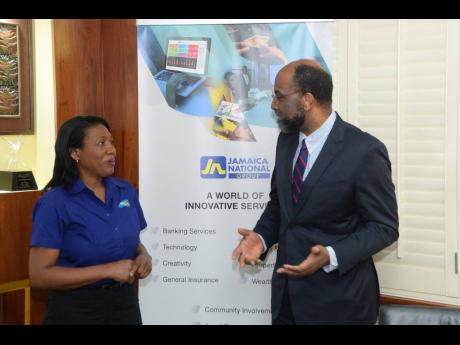 Contributed
Janice Green, president of the Jamaica Occupational Health and Safety Professionals’ Association (JOHSPA), is in deep discussion with Earl Jarrett, CEO, the Jamaica National Group, about occupational health and safety. The occasion was a courtesy call by the JOHSPA to the JN Group recently.

Janice Green, president of the Jamaica Occupational Health and Safety Professionals’ Association (JOHSPA), has urged Jamaicans to treat occupational safety with great importance, noting that employers and employees should be proactive about issues that impact health and safety in the workplace.

Green made that observation on Sunday as Jamaica joined the rest of the world in celebrating World Day for Safety and Health at Work. The day was celebrated under the theme ‘Safety and Health and the Future of Work.’

“Jamaica is one of the signatories to the International Labour Organization Convention on Health and Safety. However, we do not treat it with the importance it deserves,” Green said.

“The OSH (Occupational Safety and Health) Bill is still in the queue before Parliament after more than two decades, waiting to be passed into law,” Green added.

Green, who is also the occupational safety and health officer at the Jamaica National Group, said that in recent times, Jamaicans have witnessed discussions on the Jamaica OSH Bill, which started with written submissions from members of the public to a joint select committee of Parliament and then oral presentations on these submissions.

“In January, JOHSPA, among other entities, made its presentation in Parliament to add value to the debate. JOHSPA’s 20-point submission, if incorporated by the Parliamentary committee in the OSH act, will no doubt impact the future of work and also how health and safety professionals execute their roles. Therefore, we are pleading that this bill be placed on the front burner so that the health of workers can be better protected,” she said.

Green said that although the OSH act has not yet been passed, there are other pieces of legislation that impact workers’ health and safety, such as the Public Health Act, the Factories Act and Pesticides Control Act. Therefore, she said, more persons need to be proactive in implementing the safety measures in the relevant acts.

“It is commendable that some business operators in other economic sectors of Jamaica, although they are not governed by the Factories Act of Jamaica or other health and safety legislation, over the years have been proactive in putting people, policies, systems and procedures in place to protect workers and the employers. However, the proactive approach of these companies should not negate the responsibility of the Government to pass the occupational safety and health act,” Green said.

She pointed out that her employer, the Jamaica National Group, has also been proactive in improving occupational health and safety among staff members.

“In 2019, for instance, the Jamaica National Group introduced a mobile ramp at the Knutsford MoneyShop to facilitate the use of wheelchairs. This was done as part of efforts to protect the rights of the physically challenged. The organisation is also constantly working to improve the health and safety of its employees as it has an active occupational safety and health committee,” she said.