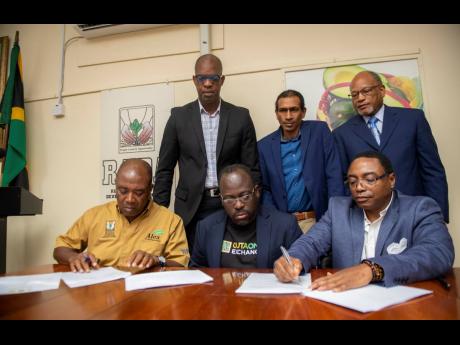 Erasing the trust deficit between local farmers and the exporters who peddle their produce to the Jamaican diaspora in North America and the United Kingdom must be addressed as a matter of priority.

That was the one of the main takeaways from Wednesday’s signing of two memoranda of understanding to facilitate trade via the OUTAONE Exchange with the Rural Agricultural Development Authority (RADA) and the All-Island Jamaica Cane Farmers Association (AIJCFA).

Chairman of the AIJCFA, Allan Rickards, raised the matter during the signing ceremony at the RADA head office at Hope Gardens, St Andrew.

“We have had people who sell their yam and don’t get payment; and you have people who have [a] contract, and when they go to collect the yam or whatever, another buyer comes and they (farmers) sell it for little more. So the integrity has to be rebuilt; and we have lost time because the mistakes of the ‘70s, through the AMC (Agricultural Marketing Corporation), we should have corrected, not simply throw out the baby with bath water,” Rickards said.

His remarks were in regard to the latest venture by OUTAONE Exchange, which will be using a web-based platform to allow farmers in Jamaica and elsewhere in the Caribbean to offer their agricultural produce for sale in the global marketplace. Its aim, according to OUTAONE, is to revolutionise and unlock the economic potential of the diaspora through farming, agro-processing, marketing and financing.

Robert Miller, senior adviser to J.C. Hutchinson, minister without portfolio in the Ministry of Industry, Commerce, Agriculture and Fisheries, sought to assure the audience at the launch that the matter had received priority attention.

“We realise that this is an issue in terms of marketing, in terms of farmers having to wait a long period of time to get their dividends. We have had intensive discussions with the OUTAONE team, minister, advisers, and we were guaranteed that farmers would be paid right away,” he pointed out.

“Usually, there is a level of distrust between the seller and buyer. One is on the other side of the world that they have never met before, but somehow they got connection to a farmer to sell. How does that buyer know that he’s gonna get his goods on time? Should he send even a deposit to this farmer? Usually, somebody gets shafted in the deal,” Thompson explained.

He said that his company has embarked on long-term and sustainable investments in regional agriculture through training, introduction of new technology, access to low-interest financing, as well environmentally friendly initiatives, among other things.

In addition, the OUTAONE project partners will utilise blockchain technology, as well as other financial-service tools such as eWallet, to centralise the transactional component of the OUTAONE agro-economic zone throughout the region. This has given the company a range of payment options that are subject to individual contractual arrangements, according to Thompson.

“A next payment can take 10 days. Some payments can be in tranches, so there are various dynamics that work with the different buyers and sellers of produce.”