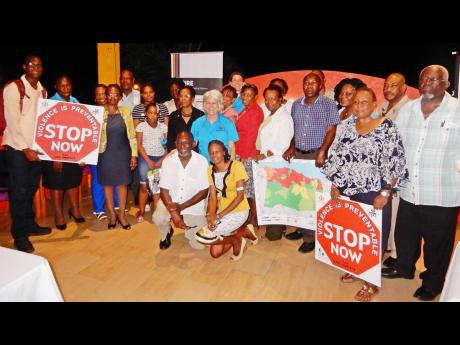 At the meeting, chairperson for the VPA, Dr Elizabeth Ward, revealed details of a 2014 study that showed that there were over 25,000 cases of violence-related injuries seen across hospitals, costing $3.6 billion, with another $5 billion incurred through indirect costs, coupled with road crashes, which cost $1.8 billion.

“And when you add attempted suicide, you’re looking overall at a cost of $12.6 billion, and the main thing about these injuries is that they are preventable. Eighty-five per cent of all injuries are preventable, and we can save this money and do better,” Ward pointed out.

Hamilton, who spoke briefly on the topic ‘ healing and preventing violence: a medical perspective’, thought that the amount was exorbitant.

“This is a waste of money and time and also causes long-term trauma on our young people and our adults and also our staff. This is not necessary,” Hamilton said.

“We need a CT scan at St Ann’s Bay [ hospital], and some of that money could be used [to purchase it.]

“I hope you hear my cry, and I encourage you to continue,” she urged Dr Ward.

Hamilton pledged to be part of the VPA and indicated that she would do an analysis of the data.

“I think from the St Ann’s Bay perspective, we would want to analyse this data further so we can have a pre-intervention and a post-intervention of having the Violence Prevention Alliance,” she said.

Ward said that the VPA was waiting for cabinet to approve its National Plan of Action. In the meantime, she outlined several strategies that could be adapted to end violence against children.

These included having a safe environment, parent and caregiver support, income and economic strengthening of women, adequate response and support services, and teaching education and life skills.

According to Ward: “The idea is, we’re really working to get empowered and resilient Jamaican youth, and you have to start young, and the first thousand days is very important. If we go and visit and break the tensions in homes and teach parents how to interact better with their babies, we will see amazing differences.”