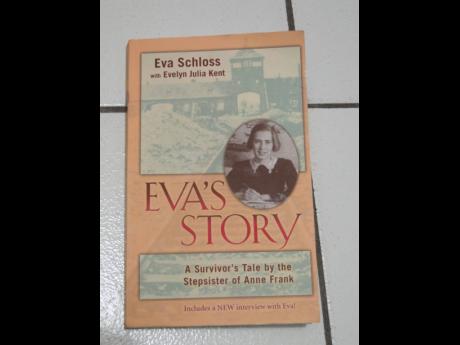 Eva Schloss (nee Geiringer), her father Erich, her mother Elfriede and her brother Heinz were an Austrian Jewish family hiding from the Gestapo (official Nazi secret police officers) in Amsterdam in the The Netherlands, to where they had fled from Austria to elude the Nazis in 1940.

Eva and her mother, who lived in the same apartment complex as Anne Frank, the diarist, stayed in the home of a Mrs Klompe, while her father and brother lodged with a Mrs De Bruin at a place in the countryside called Soesdijk.

At both places they had outstayed their welcome, and had to find an alternative. Eva and her mother were eventually taken to a Mr Reitsma, who was married to a Jewish artist. The elderly couple were living with their son, Floris.

In an effort to find a place for the men, Elfriede went to see a Christian friend, Doortje, who consulted with a nurse who lived on the same property. They found another hiding place, a big, old house in Amsterdam, to which Erich and Heinz fled by night. The tension and pressure they had undergone were eased with the new arrangements, and the family was happy to be near each other again.

Then, one morning, Tuesday, May 11, 1944, as Eva and her mother, and the Reitsmas were having a celebratory birthday breakfast for Eva, there was a knock on a door. They were not expecting anybody. Mrs Reitsma went to answer the call downstairs.

To her horror, Gestapo officers and their guards barged in past her. They went upstairs where the others were, found them, and pointed guns at them. When Floris heard the commotion, he escaped through a window on to rooftops. Eva and her mother and the Reitsmas were pushed into the street and taken to a nearby Gestapo headquarters.

As they were led away, Elfriede told the officers that Eva was not really a Jew, that she was the illegitimate daughter of her dentist. “But, it was no use, the faces of our captors were hardset and implacable. They had got what they had come for and had triumphed at last,” Eva Schloss writes in her book, Eva’s Story.

At the headquarters, they were shoved into a room in a detention centre. There were more captured people inside. They sat and pondered about how they had been discovered. Armed guards stood at the door. While some people were weeping, other just sat and stared in bewilderment.

Some were taken from the room, and were returned to wait some more, while others were not. Screams and sobs could be heard coming from an adjoining room. People were being beaten, and angry German voices could also be discerned.“We sat frozen to our chairs sickened by the noises of terror,” Schloss recalls.

Eva’s mother, too, was taken away. Thirty minutes later, Eva was taken by a policeman in green uniform to a sparsely furnished room that had a picture of Hitler hanging from the wall. Two Gestapo officers sat around a large desk.

Eva was told in German by one of the men to tell them everything they wanted to know before she could see her mother, father and brother again. Eva shouted upon hearing that. It meant that her father and brother, too, were captured.

She writes, “I suddenly began to tremble violently. I could not stop myself as they started to interrogate me in German, one after the other firing questions at me in quick succession. I was absolutely terrified of them.”

Eva pretended that she knew nothing, and was sent back to the waiting room. Her mother was not there. But she overheard what her brother and father were going through in the interrogation room, to which she was brought back. She was told her brother would be tortured to death if she did not cooperate.

To demonstrate what her brother would get someone behind her started to beat her. “The impact of the blows shot through me as they struck across my back and shoulders. They were quite relentless. I tried to fend them off with my arms, but I could not get out of their way,” Eva says.

They were beating her so that she could scream, so that her father and brother could hear. She tried to stifle the screams, but eventually had to let them go. As soon as they had got enough of her screams the beating stopped, and Eva was pushed into a room full of people who were also beaten up.

“Throughout the whole day, my fifteen birthday, I was kept prisoner in a room without food and water, having to listen through the walls to people being interrogated, bullied and beaten. It lasted until evening,” Eva recalls.