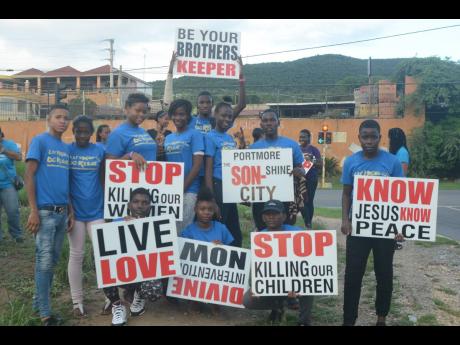 Contributed
A group from the Lef Wrong Do Right team showcasing placards used during their march last year.

With continued hopes of transforming the municipality of Portmore in St Catherine into a more peaceful place where residents live well with, and enjoy the company of, each other, another staging of the Lef Wrong Do Right road march and ­prophetic concert in the area is set for today.

The man behind the plan, Pastor Courtney Morrison, told Family and Religion that the event first came to him in a vision.

“I’m sitting down one day, and I was drawing and designing a T-shirt, and out of nowhere, the words ‘Lef Wrong Do Right’ came to me. I placed it on the T-shirt, but was wondering what it meant, and then I heard about the walls of Jerusalem and protecting the actual temple.

Later, I did a study on the 10 gates, and so we started out Lef Wrong Do Right marching off with 10 legs before getting to the centre, which is the Greater Portmore roundabout,” he recalled.

Morrison explained that God’s directive is to address the social ills in Portmore, which the event has been doing since its inception in April 2013.

According to him, “It’s a clustered community, everybody lives with their walls adjoining each other, yet there are rapes, murders and no one knows what is happening.

“God says that it should not be so. So we march with placards which say things like ‘Be thy bother’s keeper’, ‘Portmore is the Sunshine City? No, it’s the SONshine City’.”

The day’s activities include a march, an expo of the services of various government and private agencies, counselling sessions and gospel concert. All sessions are offered free of cost.

Today’s show marks the 13th staging of the biannual event, which is in its ­seventh year.

“We continue to do the march, which we think is the centrepiece of Lef Wrong Do Right, even though most people think it’s the concert in the evening. The concert really is a time of celebration, but the march is where we want to leave a message and say any place where our feet trod upon is God’s property, just like Joshua declared.

“It has been a tremendous time. We also call it the prophetic concert because at the concerts, there are declarations that we make. One year, we made the declaration that no other empire shall be in Portmore apart from the empire of God, and we have recognised that that has been fulfilled,” Morrison said, adding that the team is looking for God to do bigger things this year.

Over the years, the concert has seen acts such as Papa San, Jermaine Edwards, Rondell Positive, and Kimola Brown-Lowe. This year, Lef Wrong Do Right is themed ‘Next Generation’ and according to Morrison, the event will feature younger artistes such as Rian Davis, Godartiste, Lucas Music, Jprojek and a Nigerian artiste known as Jesse 10s.

“We hope that through Lef Wrong Do Right, the people of Portmore will understand that as human beings and as God’s creation, we have to live well together, enjoy things together, be our brother’s keeper, be protectors and providers, and ensure that in all we do, we are looking out for each other. We can change what’s happening and make Portmore the place of choice to live, do business and raise children,” he said.