'Miracle': Plane crashes into Florida river, but no deaths 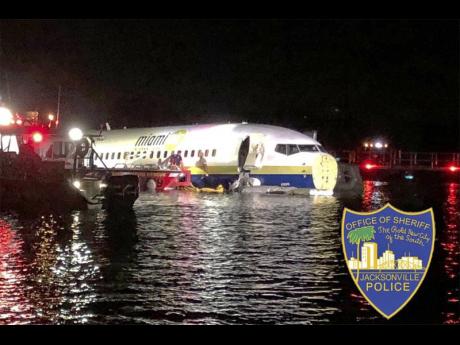 In this photo released by the Jacksonville Sheriff's Office, authorities carry out rescue operations after a Boeing aircraft ends up in the St John's River in Jacksonville, Florida, last night

Authorities in Florida, in the United States, say there were no deaths or critical injuries after a charter plane with 143 people onboard slid off the runway at the Naval Air Station (NAS) in Jacksonville last night and ended up in a river.

The Boeing 737, with 136 passengers and seven crew members, was arriving from the American Naval Station in Guantanamo Bay, Cuba when it came to a halt in the St John’s River, NAS Jacksonville confirmed in a statement.

The plane was in shallow water and was not submerged.

The NAS says everyone on the plane was alive and accounted for and reported that 21 adults were transported to local hospitals in good condition.

Captain Michael Connor, the commanding officer of NAS Jacksonville, revealed during a news conference that passengers were a mix of civilian and military personnel.

Connor conceded that the crash “certainly wasn’t ideal”, but acknowledged that it could have been much worse.

“I think it is a miracle,” Connor he told reporters during a press conference.

“We could be talking about a different story this evening.”

Officials did not immediately say what caused the plane to leave the runway.

Boeing revealed, in a message posted on Twitter, that it is aware of the incident and is “gathering information.”

Connor indicated, too, that investigators from the National Transportation Safety Board were already on their way to the crash site.