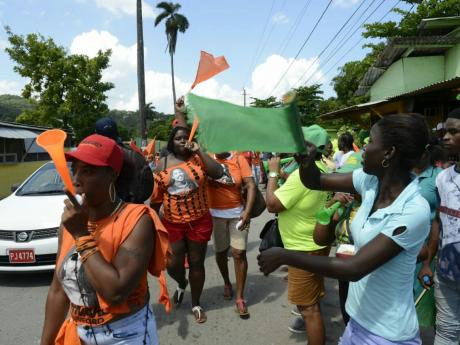 File
Supporters of the Jamaica Labour Party and the People's National Party converge on the streets during campaigning leading up to the East Portland by-election.

The deadline for disclosures of contributions and expenses by candidates and contributors for the Portland Eastern by-election is looming.

Under the Representation of the People (Amendment) Act 2016, contributors, candidates and registered political parties are required to file declarations and reports with the Electoral Commission of Jamaica (ECJ) within a prescribed time-frame.

The two candidates, as well as their agents, who contested the by-election have until May 16 to file a declaration of their election expenditures and a declaration that, to the best of their knowledge and belief, no contribution from any impermissible contributor has been accepted during the campaign reporting period.

The reporting period commences on the first day of a campaign period and ends 180 days after the end of the campaign period, which is from March 4 to September 30 for the by-election in East Portland.

The candidates and contributors are also reminded that all contributions of $250,000 or more must be declared. Under the law, candidates may accept a maximum of $1.5 million from any one donor and are only allowed to spend $15 million on election campaigning.

The deadline to file a Declaration of Contributions for individuals or entities holding Government contracts of $500,000 or more, up to two years prior to making a contribution during the reporting period, are due no later than 14 days after making the contribution.

Similarly, declarations of contributions for the reporting period by contributors who enter into a Government contract within two years after making a contribution are due within 14 days after receiving the contract.

The ECJ is urging "all responsible individuals and entities are urged to comply with the requirements of the Election Campaign Financing law". It says any person or entity that fails to file the applicable submissions may be subject to such penalties listed within the act and the accompanying regulations.

The applicable submissions should be filed with the Office of the Registrar of Political Parties at the Electoral Commission of Jamaica, 16 Red Hills Road, Kingston 10.

Persons requiring further information may contact the ECJ at (876) 922-0425-9 or by email to registry.ecj@eoj.com.jm.