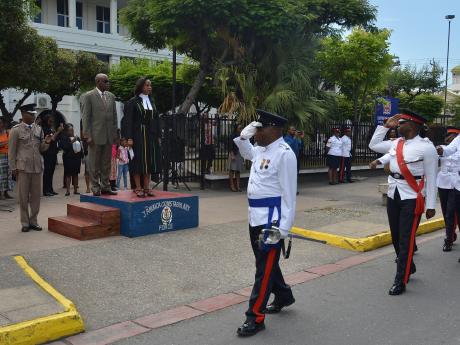 Kenyon Hemans
Members of the Jamaica Constabulary Force on parade in front the Home Circuit Court in downtown Kingston during the official opening on April 25. Looking on is Justice Lorna Shelly Williams.

KINGSTON, Jamaica, CMC – The man charged with the murder of former East Portland Member of Parliament Dr Lynvale Bloomfield is scheduled to appear in the Home Circuit Court in Kingston on Thursday.

Simeon Sutherland, 20, who is from the town of Buff Bay, Portland was arrested earlier this year by investigators from the Major Investigative Division (MID) after forensic evidence reportedly linked him to the scene of the crime.

Bloomfield was found with multiple stab wounds by an employee at his home in the parish on the morning of February 2.

Two knives that were recovered at the politician’s home, along with a vest that was found in bushes near the premises, were said to be vital evidence in the case, and had been sent for forensic testing.

Sutherland was initially detained on Wednesday, February 13 by investigators from the MID, who have led the probe.

During the initial questioning, it was revealed that he admitted to being with Bloomfield several hours prior to the politician’s nude body being discovered with stab wounds, but Sutherland reportedly denied knowing anything about the killing.

He was released from police custody on February 14.

However, following the results of forensic tests, he was again arrested and charged on March 1, for Bloomfield’s murder.

Sutherland appeared in the Portland Parish Court on Friday where his attorney, Peter Champagnie, made an application to have the case transferred to another jurisdiction.

In making his case for the transfer to the Home Circuit Court in Kingston, Champagnie argued that death threats had been made against  his client as well as members of his family.

When Sutherland appears in court on Thursday, it will be known if the judge will grant him bail.