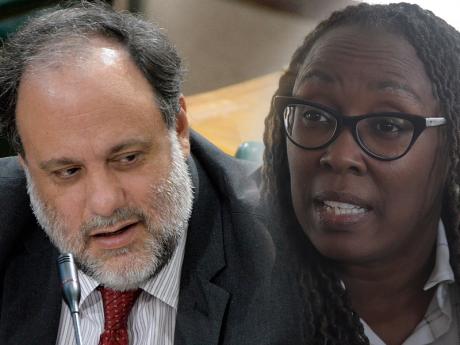 Jeanette Calder, executive director of the Jamaica Accountability Meter Portal, and Mark Golding, former justice minister and opposition member of parliament for St Andrew South, say there are serious governance issues at the Integrity Commission that need to be addressed.

Questions have been raised about operations at the agency after the discord that has arisen between the commissioners and former contractor general-turned-acting director of corruption prosecution at the agency, Dirk Harrison, over a probe.

That probe was into the 2016 sale of the Rooms on the Beach hotel and adjoining beach lands by the state-run Urban Development Corporation (UDC) for US$7.2 million.

The hotel property was valued at a high of US$13.5 million, with the adjoining beach lands going for as much as US$3.7 million.
The final deal saw both properties being sold for US$7.2 million.

Harrison, in his report, which was tabled in Parliament last week Tuesday, charged that the UDC was unable to negotiate freely and from a position of strength because of the direct involvement of Minister without Portfolio in the Ministry of Economic Growth and Job Creation Daryl Vaz and other state agencies.

The report noted that Vaz denied the claim.

READ: No second bite of the cherry

Eyebrows were raised when the commissioners questioned the validity of certain substantive conclusions of the initial version of the report and asked Harrison to review his position.

The commissioners said that acting in the interest of transparency, fairness and natural justice, they had shared the report with the implicated persons, providing them with an opportunity to respond, which Harrison saw as providing these individuals, who had given evidence during the probe, "a second bite of the cherry".

The implicated persons' responses were also appended to the final report that was tabled in Parliament.

For Golding, the commissioners did the wrong thing.

"They have publicly said that they have somehow doubted the plausibility of the conclusions of the contractor general that were drawn in a draft that was sent to them, and secondly, they have appended to their report sent to Parliament what you might call exculpatory statements, statements from persons implicated or criticised in the report, having given them a chance to review the entire report and make their own feelings about it, set out in writing and attached to the report. That has never been done," Golding said.

"In fact, Mr Harrison has written a legal option indicating that the commissioners were not acting in accordance with the statute when they did this. In my view, they took the wrong approach in doing this. I think the report should have been sent to Parliament on its own, and those persons who were not happy with the conclusions drawn can say what they want to say at that point. But to attach their views at that point was a pre-emptive strike when it was going to Parliament. It was very peculiar, unprecedented, and the wrong approach," he added.

She said that while she supports the commission's position of fairness and natural justice, she believes that it went about achieving these in the wrong way.

"I heard the concerns of the commission as it relates to natural justice, and that is something that the legislators of the act were very mindful of in the carving of that act —how is it that we carry out these investigations and how do we conclude them by being fair to the parties involved. I think that by bringing in this new commission with a whole new way of governing, we should expect a new way of doing things.

"I have no difficulty with something unprecedented being done; in principle, I don't have a difficulty with it. But in terms of how this was really played out, it goes against the very grain of one of the four objectives of the act. And let us not forget that the whole point of rehashing this act, a major part of it, was to enhance public confidence, and I believe — as maybe the first time at the wicket — I believe that the NIC (National Integrity Commission) has erred in the 'how' and not necessarily the 'why'."

Calder and Golding were speaking in an interview on the talk show 'Morning Agenda' on Power 106 FM this morning.