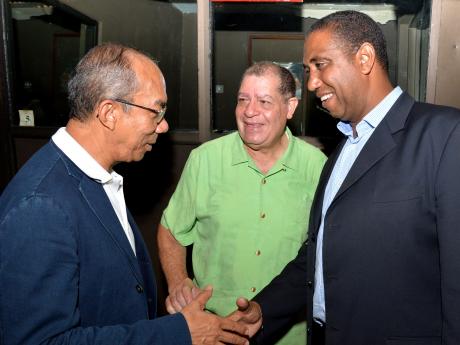 Minister of Industry, Commerce, Agriculture and Fisheries, Audley Shaw, has called for stronger collective efforts to enforce the law underpinning the Agricultural Produce Receipt Book System, which was established to combat praedial larceny.

His urging comes against the background of complaints from several victims that enforcement of the law by the police force has, to some extent, been inadequate, resulting in thieves frequently raiding farms and escaping with produce.

“We have to get serious about our laws. This is a time that is going to require of us courage, collective action, and working in unity. When the criminals find out that we are serious because we’re working together, this problem is going to become a diminishing [one]. So the police must demand receipts,” he underscored.

Shaw was speaking at the Coconut Industry Board’s Annual General Meeting on May 4 at the Jamaica Conference Centre in downtown Kingston.

National Security Minister, Dr Horace Chang, who also spoke at the meeting, said his Ministry is aware of the farmers’ challenges, and is willing to continue working with them to eliminate the problem.

“The challenge has become much more critical. Security is one of the foundations on which we build our economy and, certainly, praedial larceny is an area [of the Ministry’s focus],” he stated.

Chang, who also noted that there have been increased attacks on farmers, assured that efforts are being made by the security forces to combat this.

Delegates attending the meeting were updated on wide-ranging developments.

These include impending plans for the industry’s expansion and farmers’ roles in this undertaking.

Its mission is to promote the interest and efficiency of the industry, which comprises over 800 farmers.