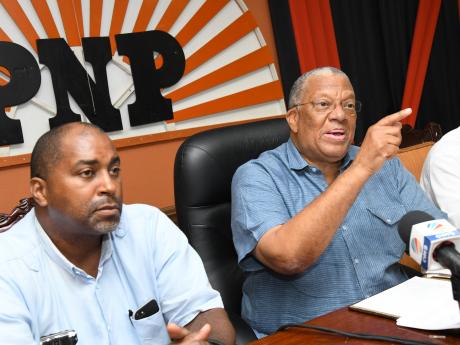 The parliamentary Opposition wants Minister without portfolio in the Office of the Prime Minister Daryl Vaz sent on leave until the completion of an independent audit of the controversial sale of the Rooms on the Beach property in Ocho Rios, St Ann.

Opposition Leader Dr Peter Phillips, who made the call today, demanded, too, that the auditors should be chosen by a panel comprising the corruption watchdog group National Integrity Action and representatives of international financial partners.

“Until the independent audit is complete, the responsible Minister, Daryl Vaz should be sent on leave,” Phillips told journalists during a press conference at the St Andrew headquarters of the People’s National Party.

He also served notice that the issue will be placed before the Public Administration and Appropriations Committee of Parliament.

Vaz has been under fire since the Integrity Commission delivered its report last week about the sale of Rooms on the Beach by the state-owned Montego Beach (1975) Limited to Puerto Caribe Properties Limited.

The sale was investigated by the former Contractor General’s Office, which has been subsumed by the Integrity Commission.

The report revealed that the property was valued by three “recognised” valuators at between US$11.8 million to US$13.5 million.

Phillips noted that the Urban Development Corporation (UDC) indicated at the time that there was “strong interest from the private sector in the acquisition of the subject property for development as a high end hotel.”

“It is therefore reasonable to assume that the government could have easily obtained a price close to the higher valuation, more so from the entity operating next door. We therefore maintain that the government gave away US$6.3 million, just short of J$1 billion or 47 per cent of the value of this in-demand asset of the Jamaican people,” Phillip asserted.

The report claimed that Vaz “improperly inserted” himself into the negotiations for the sale of the property and concluded that the UDC was unable to negotiate freely and from a position of strength because of the “direct involvement” and the West Portland Member of Parliament and other state agencies.

As a result, the Opposition Leader said there are questions for Prime Minister Andrew Holness must answer.

“The Prime Minister must also let Jamaica know whether he was aware of all of Minister Vaz’s activities in relation to this matter, including his participation in negotiations, or was the minister on a frolic of his own,” he questioned.