Growth & Jobs | Grow your wealth! - James says more than 300,000 Jamaicans could benefit if they register their land 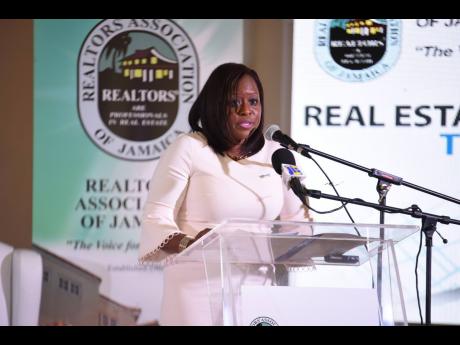 Petal James, head of Mobile Banking at JN Bank, is again reminding Jamaicans about the significant economic benefits they can unlock by acquiring a title for their unregistered land.

“In our current economic climate, where the need to grow the Jamaican economy is very much in the forefront, tapping into the unlocked potential of unregistered land by registering it may not only assist many individual persons, but the country as a whole,” she said.

Data provided by the National Land Agency reveal that more than 350,000, or 40 per cent, of all parcels of land in Jamaica remain unregistered. It is estimated that the value of these properties could be in excess of $200 billion or US$1.6 billion.

James noted that this means that almost one-half of the land in Jamaica is not being used to its full potential and is, therefore, not improving its owners’ or the country’s economic prospects.

The JN Bank senior manager made the comments while addressing the Realtors Association of Jamaica, North Coast Symposium, held recently at the Montego Bay Conference Centre in St James. The event, which was held in partnership with JN Bank, focused on the theme ‘Real Estate Investment 2019: A Road Map.’

She noted that in the absence of titles to their property, many Jamaicans are unable to unlock wealth and, in turn, the economy suffers. “This is because it is often more difficult for persons who own unregistered land to do certain transactions, such as to obtain a mortgage, using the land as security,” she informed.

James advised that with a title, persons can open a world of financial possibility for their families, pointing out that there is convincing evidence from around the world that land registration has led to better access to formal credit, higher land values, higher investments in land, and higher income.

“Your title can be used to access funds, which are best used to acquire long-term assets capable of increasing net worth; and, as much as possible, to generate income; or to improve your capacity to earn higher levels of income in the future,” she said.

James further informed that persons can use their titles to borrow capital to build, to expand and inject capital into their business, “to send yourself back to school, or to send their children to school”.