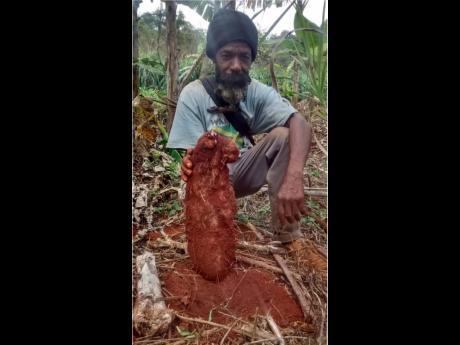 Contributed
More than 165 farmers were interviewed, with the majority of them coming from Lowe River, Trelawny.

Yams, primary agricultural commodities and major staple crops, are major sources of income and have high cultural value. With the various shapes of the tuber, such as round, cylindrical, oval or flattened, yam farming and reaping can be a back-breaking, labour-intensive occupation.

Jamaican farmers, like many farmers worldwide, struggle to meet the demands of the export market – both in quantity and quality – because of the limitations presented by the traditional method of yam production.

According to Yanque Yip, entrepreneur and chief executive officer at TSOTARE Agricultural Innovators, with Jamaica being the third-largest exporter of yams worldwide, behind the Ivory Coast and Ghana, the innovation will present an alternative to farmers as agriculture is Jamaica’s biggest industry.

“As a child, I would accompany my grandmother to her farm. One day, I watched her reaping yam, and after extended minutes of digging with her machete and moving dirt, I realised that the yam still broke off in the soil. However, I also noticed that the yam was against a stone inside the soil, and that side of the yam took the shape of the surface of the stone that it grew and rested against. This led to the idea to grow yams in a specific shape,” Yip said

The Rootube system, he said, will revolutionise yam production around the world. “The system controls the shape of produce, increases growth rate, and protects the yams from drought, excess rain, praedial larceny, pests and disease,” Yip told The Gleaner.

“There is minimum land space needed compared to traditional methods. It is eco-friendly, with no need for yam heads or yam sticks, producing clean yams and labour-friendly production,” he added.

Yip is currently developing the system to perfection while testing all aspects of its operations. Having interacted with 4-H Clubs, youth farmers; traditional farmers; female farmers, greenhouse farmers, the Ministry of Industry, Commerce, Agriculture and Fisheries, exporters, and yam farmers from Africa (Nigeria and Ghana), it is quite evident to him that this problem of yam production is significant.

Yam production by the top 50 yam-producing nations in 2014 amounted to some 67 million tonnes, valuing more than US$67 billion at US$1/kg. As an entrepreneur, Yip believes that his innovation will contribute to the economic well-being of Jamaica.

“I realised that the prosperity of Jamaica will rely heavily on economic growth from new industries and also from the optimisation and revolutionisation of existing industries. Therefore, entrepreneurs will significantly boost the ecosystem of society. I believe that we all need to be entrepreneurial, even if we are employed,” he said.

“Entrepreneurship is by no means easy. It requires observation, research, identifying a monetisable opportunity, tests, validation from the potential customers, willingness to accept failures, following clear pivots, and iterating or even completely changing your business model. What I do know is that the results of going forward as an entrepreneur can be very rewarding through the lessons leant, networking and establishment,” he said.