Nervous workers back on the job at CRH 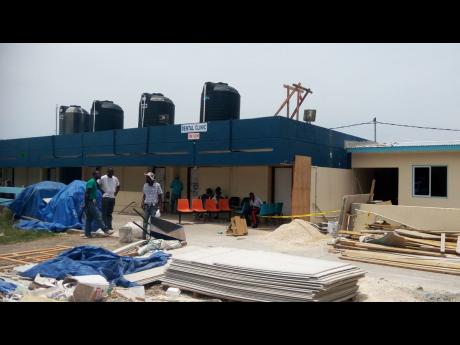 In a bid to prevent a repeat of Tuesday’s shooting incident in which two construction workers were seriously injured, additional security was put in place at the Cornwall Regional Hospital (CRH), where restoration work is under way.

Errol Greene, the head of the Western Regional Health Authority, which oversees Cornwall and other health facilities in western Jamaica, said that the shooting has sparked a review of the security arrangements and emphasised that the issue was a matter of priority.

When The Gleaner visited the location yesterday, a police team was observed on patrol. However, the customary banter among the workers was muted.

“There is some amount of nervousness. A just yesterday the thing (the shooting) happen, and the man who did the shooting is from this area, and the police have not managed to apprehend him yet,” a worker told The Gleaner. “We are happy for the extra security because at the end of the day, when you finish working, you want to be safe to go back home to your family.”

When contact was made with the Mount Salem Police Station about the status of its investigation, a police officer said that they had all relevant details on the alleged shooter, who the workers had identified only as ‘Short Man’. The police did not disclose his name.

“We are calling on this man to surrender peacefully to the police so that he can have his day in court,” the police officer said. “We will not allow him to stay out there and possibly do more harm, especially since we have reason to believe he is in possession of an illegal firearm.”

According to reports, about 11:30 a.m. on Tuesday, the accused shooter and another construction worker got into a quarrel after a bucket that he was using to haul concrete mixture, via a pulley, became dislodged and fell, narrowly missing the head of a supervisor.

The man who is now on the run reportedly left the site in a huff, claiming that the other worker dissed him. He later returned with a firearm and opened fire on the man who had earned his wrath. The man was hit seven times, while another man who was caught in the line of fire suffered a single bullet wound.