Cool upgrade for May Pen Hospital 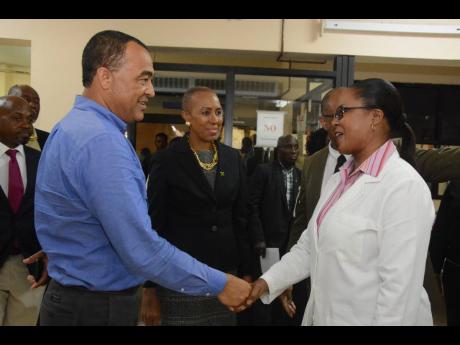 Minister of Health and Wellness Dr Christopher Tufton (left) and Minister of Science, Energy and Technology Fayval Williams (centre) are greeted by consultant and head of the Accident and Emergency Unit of the May Pen Hospital, Dr Andrea Johnson, during a tour on Thursday. The tour followed the handover of an upgraded air-conditioning system.

A $73-million air-conditioning upgrade at the May Pen Hospital in Clarendon will result in the health facility’s annual electricity bill being slashed by 20 per cent, or $5.2 million.

The hospital AC upgrade is part of the Government’s plan to lower the cost of electricity through a raft of energy-efficiency and conservation measures.

The project, which was funded by the Petroleum Corporation of Jamaica and completed three months within schedule, involved the installation of a medium energy-efficient cooling system that utilises a rooftop packaged system design at the Accident and Emergency Department, ensuring that that section of the facility meets compliance standards.

Another cooling system was deployed at the offices of the Clarendon Health Department, which is located on the hospital compound. That system is equipped with a variable refrigerant flow that maximises cooling efficiency according to building use and temperature conditions.

At the handover ceremony yesterday, Minister of Health and Wellness Dr Christopher Tufton had even more good news for the parish. Citing the expansion of the town of May Pen and surrounding communities, Tufton said that $283 million had been earmarked for further upgrading of the hospital and another $132.4 million for the development of the May Pen West Wing.

Keynote speaker Fayval Williams, minister of science, energy and technology, said that in addition to the installation, plans were in place for its sustainability.

Among the measure in place will be workshops, as well as energy-audit training sessions facilitated by the Energy Efficiency and Conservation Programme.

“There will also be ongoing measuring, reporting and verification regarding the electricity consumption patterns of the hospital,” Williams shared, adding that the EECP would be financing a five-year maintenance contract.