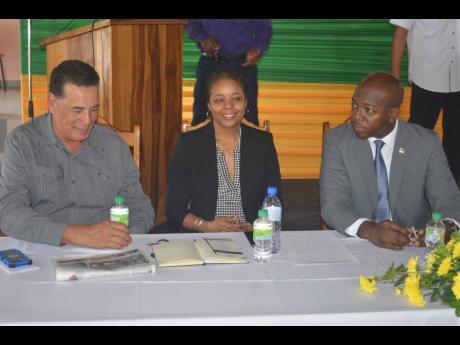 Contributed
Pearnel Charles Jr (right), minister without portfolio in the Ministry of Economic Growth and Job Creation, in conversation with Marlene Malahoo Forte, attorney general and member of parliament for St James West Central, and Mayor of Montego Bay Homer Davis during a ceremony to present land titles to residents of Pitfour, Retirement, and Meadowsvale in St James on Wednesday. The ceremony was held at the Dawn Christadelphian Bible Centre in Retirement.

With ongoing dry conditions and water shortages plaguing some parts of the island, Pearnel Charles Jr, minister without portfolio in the Ministry of Economic Growth and Job Creation, has said that the Government is doing all it can to manage water distribution to affected consumers.

Charles gave the assurance on Wednesday after he participated in a ceremony to present land titles to residents of Pitfour, Retirement, and Meadowvale in St James. The ceremony was held at the Dawn Christadelphian Bible Centre in Retirement.

“The prime minister has been meeting with the National Water Commission (NWC), and we’re ensuring that all is being done to maintain the most effective management of our water resources,” Charles told The Gleaner.

“The hope is that we’ll be able to manage the water distribution as best as possible with the recognition that we’re having this dry system so that we can use the little we have as efficiently as we can,” added Charles.

In recent times, the NWC has been harshly criticised, particularly by residents in sections of St Andrew, Kingston, and St Thomas, for failing to provide notification of water lock-offs. There have also been complaints about the ongoing construction projects in Kingston interrupting the water supply to several communities.

Commenting on the concerns in Kingston, Charles said that emergency works have been done to accommodate the redistribution of water to some affected areas.

“A lot of emergency work has taken place so we can have interim bypasses of some of the pipelines to ensure distribution of water. There have been scheduled redistribution and extensions from Constant Spring, Mona, Hope, Rio Cobre, Tulloch Springs, and other areas,” said Charles.

“There is also the engagement of private water trucks by the NWC to ensure that we can distribute water as best as possible. We have been told by the NWC of the need for some further engagements to use the trucking system where necessary. The permanent replacement of some pipelines will be designated pretty soon,” said Charles.

Last month, the NWC announced that a monitoring programme would be instituted for the effective management and distribution of water to lessen the effects of the drought.