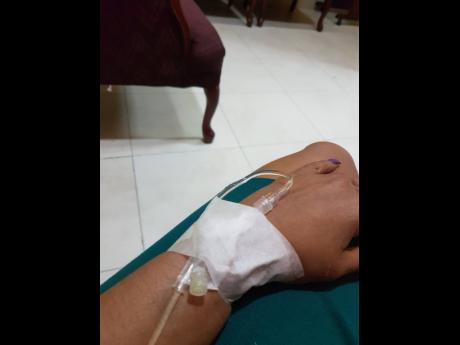 Today is World Lupus Day, and everyone is called to participate in observing the day by bringing awareness to the disease. Meet Heather McKoy, a wife, mother and manager who has been living with systemic lupus erythematosus for the last 17 years.

“It started with sharp, shooting pains in my wrists and shoulders. Then, I noticed each time I bent to pick up something, I had to take a breath before getting up as the pain was so severe,” she said. “I had just been promoted. My girls were two and six years old. I was too busy being ‘supermom’ to pay attention to a little pain,”she told The Gleaner.

McKoy was later asked by a good friend, Carlene Gayle, to give blood as she needed to do surgery. After doing so, however, she was shocked to be summoned to the office by the nurse, who asked if she had been feeling sick lately, to which she replied, “Not really.” The nurse proceeded to inform McKoy that she needed to make an appointment with her doctor urgently and that because she was anaemic, she would not be able to donate blood.

“Following my appointment with the doctor and a course of blood tests, I was referred to an oncologist. Some time later, I got the flu and had a fever that kept me in bed, so I went back to the doctor. She prescribed medication that made me feel better during the day, but by nightfall, the fever came back,” she explained.

According to McKoy, one morning, after having some fruits, she started feeling nauseated and rushed to the bathroom, where she threw up everything until she saw specks of blood. She then called her husband, who rushed her to the doctor, but she fainted and only heard the name of the doctor and her location before she passed out again.

“A battery of tests was done to determine what was happening to me, and by the second day, I felt strong enough to go the bathroom and was shocked to see a dark discolouration across my cheeks and nose – the first typical symptom of systemic lupus erythematosus,” McKoy recounted.

“I was blessed to be working in a place where my illness was understood, but at the same time, when I was at work, I always delivered because I could be feeling a little ill and have to ask for sick leave the next day,” she said.

McKoy explained that with lupus, everything is magnified, so if there were a problem with her eyes, she would have to see a specialist, and things like infections or the common cold cannot be taken lightly.

“I have lost my hair three times since having lupus. One time, I lost all the hair on my body except for my eyelashes,” she said. “The first time it happened, I bawled while the hairdresser sang to me as she cut my hair. I had to let it sink in that this was my new normal.”

The other two times were not easy, but by this, McKoy was accustomed to her ‘normal’ changing once again. She explained that as a result, she always keeps her hair and nails looking good because she is determined not to wear her sickness.

Lupus has caused her kidneys to deteriorate, and she has to be taking the medication that is used after an organ transplant is done. She has had to battle fibroids and skin ulcers, which are painful, and often, a minor surgery is the only way to get rid of them. Yet, when people see her and ask how she is doing, if her reply is “not well”, they say, “But you don’t look sick,” and that is because pity is not what McKoy wants.

“My children push me to go the extra mile, and the support from my work and church community helps me. Having a husband who also understands is a plus while fighting lupus,” McKoy stated. “You also have to have a good relationship with your doctors because you may have to call or visit them at odd hours of the night. This is lupus.”

McKoy has made many changes over the last 17 years living with lupus, all in order to see her children reach to the point of taking care of themselves. That is her dream, and to attain that, she will do anything.