Margaret Chen goes below the surface 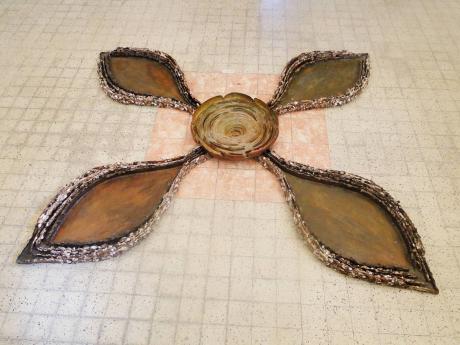 If you were not told before you saw Margaret Chen’s 12 pieces of artwork now on show at Olympia Gallery in Papine, St Andrew, you would stare in awe at how different they are and wonder what they are composed of. The pieces are being exhibited under the title ‘SUBSTRATA’.

And if you asked the artist herself, she would tell you that her mixed-media construction pieces (done between 1990 and 1996) are made mainly of carved wood, oyster and other shells, bones, and woodchips, exploring themes such as life cycles, death, regeneration, transience, loss and transformation.

In addressing patrons on opening night, Poet Laureate Lorna Goodison said, among other things, “She is engaged in doing the deep work of excavating the evidence for all of us. She is climbing up and down the stairs that lead to the collective unconscious to retrieve and present us with stunning images of what lies below the surface, deep in the substrata, down in ourselves, because we all know deep down that we are all connected.”

In the show’s catalogue, Petrona Morrison says they “are carved, glued and assemble in a long process, producing a visual language which is both potent and hermetic and which comes out of a self-reflexive impulse”.

In essence, Chen is using her work to find herself, to go below the surface of her being, the place from which she originated. And having gone there, the cross sections of the layers expose themselves.

“Through processes of layering, inclusion and exclusion, the artist consciously and unconsciously pursues this excavation of self, fusing personal experiences with universal concerns of temporality and transcendence,” Morrison writes.

One of the pieces that are inspired by Chen’s person experiences is ‘Cross-Section of Passage’. Standing upright from the floor, the two segments (faces) are connected by materials inside each to make it one piece. The interior and things that make it up can be seen from either side.

It is a memorial of sorts to Chen’s late mother, she told The Gleaner on Saturday. The piece that Chen holds dearest to her heart and is in no rush to get rid of is ‘Steppe X’, the very last in a series of 10. The others have all been sold.

‘Cross-Section of Substrata’ is three separate pieces mounted as one.

In all of the awe-inspiring works, the pi è ce de résistance seems to be the elaborate ‘Cross-Section of Labyrinth’ (mixed media on plywood; carved wood centre). It consists of a centrepiece with four leaf-shaped arms radiating from it, giving it the appearance of an X with the cross section of a rose at its centre. Other pieces on show are ‘Geode’ and ‘Cross-Section of Current’.

The story of how they got to the Olympia Gallery is almost 20 years long. Chen said they were sent to Canada in the late 1990s for a show, but when the show was over, she could not afford the freight crates to ship them back to Jamaica. They were stored in the basements of her brothers all that time. Last year, she and her siblings made the freight crates themselves and repatriated the pieces. Now, she said, laughing, “Of course, I would love to sell some.”

“This body of work emphatically affirms Margaret Chen’s standing as a major contemporary Caribbean artist. It also reminds us of the value of artistic integrity, consistency and commitment to follow the internal voice,” Morrison writes.

In addition to this current exhibition, the retired Edna Manley College art educator has had four other solo ones, in 2003, 2000, 1996 and 1990. She has also participated in major groups exhibitions from 1991-2017 in Jamaica, the United States, England, Grand Cayman, Canada, the Dominican Republic and France.