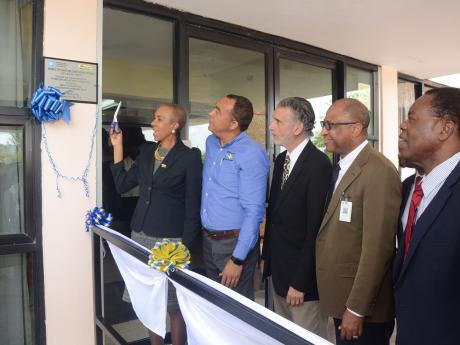 Minister of Science, Energy and Technology, Fayval Williams (far left) cuts the ribbon to unveil a commemorative plaque installed at the entrance of the Administrative Building at the May Pen Hospital in Clarendon to mark the successful completion of a $73 million air conditioning upgrade project carried out at the facility under the Petroleum Corporation of Jamaica. Also on hand for the unveiling were (from second left) Minister of Health and Wellness, Dr Christopher Tufton, Chairman of the PCJ, Russell Hadeed, Chief Executive Officer of the May Pen Hospital, St. Andrade Sinclair and Counsellor for the Denbigh Division, Joel Williams - Contributed photo

A $73 million air conditioning overhaul carried out at the May Pen Hospital in Clarendon by the Petroleum Corporation of Jamaica (PCJ) should reduce electricity consumption for cooling by 20% and shave approximately $5.2 million off the facility’s annual electricity spend.

The project was completed under the PCJ’s Energy Efficiency and Conservation Programme, which finances investments in energy efficiency and energy conservation measures in the public sector.

The multifaceted intervention involved the installation of a modern, energy efficient cooling system which utilises a Rooftop Packaged System Design at the Accident and Emergency Department, ensuring that this section of the facility meets the compliance standards for fresh air.

Another cooling system was deployed at the offices of the Clarendon Health Department which are located on the hospital compound.

In that instance, the system was equipped with a Variable Refrigerant Flow which maximises efficiency by adjusting the level of cooling according to building use and temperature conditions.

In addition, modifications were made to the chill water air conditioning system serving the general hospital area.

The successful completion of the project was marked by a handing over ceremony which was held at the hospital on Thursday.

While addressing the event, Brian Richardson, the PCJ’s Acting Group General Manager said, “We anticipate that the upgrades to the existing infrastructure and the new solutions installed will reduce electricity usage at the hospital which should lower operational expenses.  Also, we know that the improvements to the air conditioning have made for a more comfortable environment for the patients and a more productive work space for the staff.”

In his response on behalf of the beneficiary, Chief Executive Officer, May Pen Hospital, St Andrade Sinclair said, “We are sincerely grateful for this monumental opportunity to improve the energy needs of the May Pen Hospital. We have come a far way and, it’s no doubt uncharted waters; but, already we are seeing benefits with an environmentally friendly atmosphere for both patients and staff. We are happy for the improvements and hope this example will encourage NGO’s, the private sector and members of our Diaspora to follow suit and contribute to our hospitals and clinics.”

Minister of Science, Energy and Technology, Fayval Williams, who delivered the keynote address at the ceremony, indicated that several similar projects would be undertaken in the current fiscal year as the Government of Jamaica continues to take a leading role in energy conservation.

“In 2019/20 the Ministry of Energy, through its agency, the PCJ, will be carrying out energy interventions at schools, hospitals, health centres and other public facilities across the country with a cumulative value of more than $1 billion dollars, which not only reduce the national spend on energy but will also allow us to extract more value out of every kilowatt of energy used at public sector facilities,” she explained.