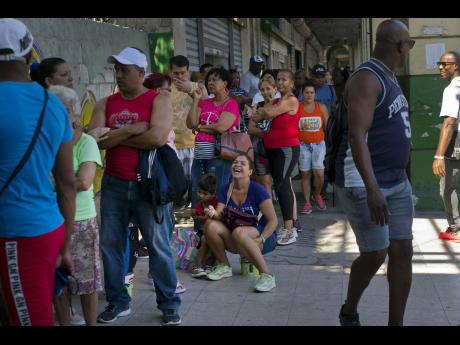 In this April 17, 2019 file photo, people wait in line to buy chicken at a government-run grocery store in Havana, Cuba AP

HAVANA (AP) — The Cuban government announced Friday that it is launching widespread rationing of chicken, eggs, rice, beans, soap and other basic products in the face of a grave economic crisis.

Commerce Minister Betsy Díaz Velázquez told the state-run Cuban News Agency that various forms of rationing would be employed in order to deal with shortages of staple foods.

“We’re calling for calm,” said Díaz Velázquez, adding that Cubans should feel reassured that at least cooking oil would be in ample supply.

“It’s not a product that will be absent from the market in any way.”

She blamed the latest round of rationing on the hardening of United States (US) trade embargo by the Trump administration.

Cuba imports roughly two thirds of its food at an annual cost of more than $2 billion and brief shortages of individual products have been common for years.

Some Cubans took the news in stride.

“The country’s going through a tough moment. This is the right response. Without this, there’ll be hoarders. I just got out of work and I was able to buy hot dogs,” said Lazara García, a 56-year-old tobacco-factory worker.

Manuel Ordoñez, 43, who identified himself as a small business owner, said the new measures would do nothing to resolve Cuban’s fundamental problems.

“What the country needs to do is produce. Sufficient merchandise is what will lead to shorter lines,” he said.

Limited rationing of certain products has already begun in many parts of the country, with stores limiting the number of items like bottles of cooking oil that a single shopper can purchase.

The policy announced by Díaz appears to go further and apply the same standards across the country of 11 million people.

The latest shortages and rationing appear to mark the end of a phase of relative prosperity but conditions are nowhere close to the deprivation of what is known as Cuba’s “special period.”