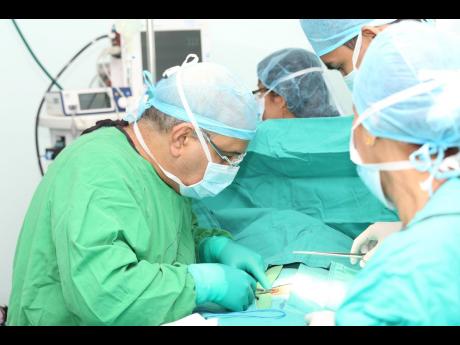 Jamaican women as young as 19 years old are exploring the option of tubal ligation, or ‘tie-off’, but most local doctors are unwillingly to operate, saying they are not old enough to validate the life-altering surgical procedure.

Tubal ligation, also called female sterilisation, is a procedure in which the Fallopian tubes are tied, or blocked, to prevent pregnancy.

A friend of 19-year-old Sophia McGunn* told The Sunday Gleaner that McGunn was forced to have the procedure done abroad after doctors in Jamaica refused to perform the operation, saying she was too young. McGunn had consulted gynaecologists in four different parishes for tubal ligation, on medical grounds, but was refused every time. She eventually had the procedure done in Europe.

“She developed gestational diabetes and hypertension and had symptoms of pre-eclampsia. She developed postpartum depression as a result of the physical and mental stress the pregnancy caused. She still has some issues bonding with her near six-month-old daughter and she surely doesn’t need another,” the friend stated.

She added that the doctors who were consulted failed to take her medical history into consideration, which is why she had to seek to have the procedure done internationally. She said that the doctors involved were more concerned about if her partner wanted more children.

Professor and consultant in the Department of Obstetrics and Gynaecology at The University of the West Indies, Horace Fletcher, said that doctors shied away from performing the procedure on young patients because tubal ligation was permanent and could have terminal consequences for some relationships.

“So if you tie off a young woman – and we have seen it many, many times – you are in love and you decide that you would only want two children with your husband at age 25, and by the time you reach 35, both of you have split up and you meet somebody else, then you want to reverse it,” said Fletcher.

The medical consultant said that circumstances can change, and so he usually recommends to young people that they use another form of contraception that is not permanent.

“I can remember one patient who ... was in her 40s. She had seven children. She went abroad and she got married to a younger man. She did not tell the man that she had a tie-off, and so she came back and wanted us to ‘pull it’, according to her. Tubal ligation is permanent,” said the medical consultant, who advised that there were rare circumstances, with minuscule likelihood, where a reversal was successful. He urges women to explore alternative means of contraception if traditional strategies are inimical to their health.

“We tend to do it only when we think the person has completed their family and if there are old enough. I mean, if a woman has completed her family in her 30s or 40s, tubal ligation can be done, but if you come to me when you are 19 years old or in your 20s I am not going to do a tubal ligation on you because I have seen many, many instances where people find new partners and come back and want to pull, and all that kind of stuff,” said Fletcher.

Gynaecologist Kiri-an Bridgewater said that she was aware of numerous patients who had regrets about ligation, perhaps, she told The Sunday Gleaner, because they did not understand the gravity of the decision.

“I think even just the phrase ‘tying the tubes’ makes it sound more trivial than it actually is because it sounds like you are tying a shoelace, and to untie a shoelace is a fairly simple thing, while to undo a tubal ligation, especially one that’s done in, like, the public sector, it’s a virtual impossibility sometimes,” said Bridgewater.

She said that while she understood the right of a woman to make decisions about her body, she felt compelled to go the extra mile in counselling and educating patients on the possible after effects.

Gender and development activist practitioner Joan Grant Cummings said that tubal ligation has been the subject of debate.

“I used to work in reproductive healthcare in Canada, and so when women ask me to speak to their doctors, the doctors would say no, but her husband or her boyfriend would call and complain and bother me about how can I reverse it because he wants her to have his child even though she may have two or three other children,” said Grant Cummings, citing the uphill task for women under 45. “It’s the whole masculine thing of ‘she must have my child’.”

Elise Fairweather Blackwood, director of nursing services at the Victoria Jubilee maternity hospital, could not offer specific data on the number of tubal ligations at the institution but said that the procedure was on the decline at the public facility but was still available to some women.

“We have a programme where the mothers, if they request tubal ligation immediately after delivery or 24 hours after delivery, then it can be done, whereas the others who are not really sure they want it at that time, they would go to either a family planning clinic or the fertility control unit, where they would make an appointment to have the tubal ligation done,” said Fairweather Blackwood.

Reverse tubal ligation is not done at Jubilee.

Cummings said that she thinks it’s the right of women to make important decisions about their bodies.