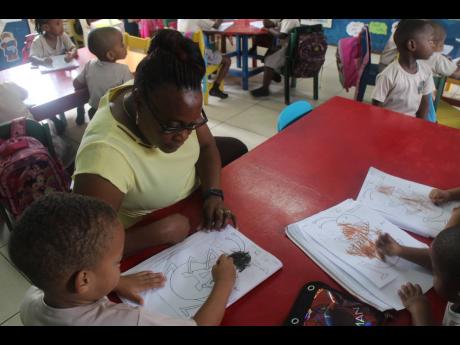 Donna Matthews with her students during a class session.

She had just completed her studies in practical nursing and thought it best to seek a job as a school nurse, but life would have it that Donna Matthews be employed the same day, given an additional role and later encouraged to further her studies for the career she now has.

A kindergarten teacher at El Instituto de Mandevilla, Matthews said that had it not been for the late founder of the institution, Audrey V. Salmon, she would not have been where she is today.

“I started working here in 1999; that would be 20 years ago. I started as a school nurse and then later I became an assistant teacher. I did a secretarial course at Jamaica Bible College. It was no plan of mine to teach.”

Matthews said that how she got the job has proven to be the most memorable moment she has had to date.

“When I came for the interview for the school nurse position, I was told that I would also be assisting teachers. I was taken on a tour of the classrooms and the sick bay. When I stepped into the classroom, a little girl who was seated began stretching over to see who was coming in. The chair fell over with her and she had an injury. It was at that time that I was asked to start the very same day as the nurse.”

Her supervisor saw her passion for education and encouraged her to get certified. Mathews would later complete levels one and two in early-childhood education at the HEART Trust/NTA and assume duties as an assistant teacher.

She added that every summer, the founder of the institution would remind her that this is the year she starts college, but she never really took it seriously until she became confident enough to realise her potential.

“I am the only one in my immediate family on my mother’s side to go to college and it was hard. The first year I cried. What was even more painful was that Mrs Salmon died in my first year. I managed to complete the four years though, and I owe it all to her.”

With no biological children of her own, Matthews said that she has helped to mould hundreds of these tiny humans.

“I have a passion for children. I love working with them, especially the small ones. They give trouble, but you have to have patience and tolerance. All of them are my children and I treat them as such. If any of them has an accident, I don’t wait until the auxiliary staff gets here, I do what I need to do.”

Matthews has also been praised for her acts of selflessness; going to the point of ensuring that a child gets home safely if a parent forgets or is unable to do the pickups.

“I worry when I am away from the children or they are away from me. I am almost never absent from school. I am always here, even during the holidays; I call to check on them and they do the same. People ask me all the time how I manage all the children, but it is something that has grown on me and I can’t see myself doing anything else.”

Describing herself as a homebody, Matthews revealed that when she is not with her students, she is at home listening to music, out at a gospel concert, reading a good book, or watching the Lifetime cable channel, though her children are always on her mind.

“My children inspire me. I love them, and their well-being means the world to me,” she ended.