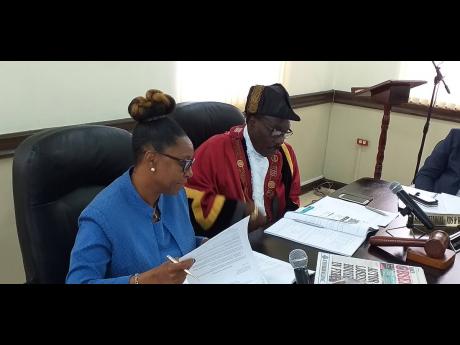 The Portland Municipal Corporation is now in the process of disseminating information to the public as it relates to building fees standardisation, which became effective on May 1.

The new increase was made public during Thursday’s monthly sitting of the municipal corporation by its chief executive officer, Jennifer Brown-Cunningham, who pointed out that all municipal corporations are now on par as it relates to fees charged for building construction and other related charges.

“We will have to advise members of the public that effective May 1, the rates for building fees for submitting your building plans have been increased,” said Brown-Cunningham.

She continued: “And when we talk about standardisation, all of this has come about because each municipality was charging a different rate. The Government is moving towards having one fee. Anybody coming to do business in Jamaica, if you’re in Westmoreland, if you’re in St Thomas, if you’re in Portland, it will be one rate. So you won’t have to be guessing as to what the cost is going to be.”

According to Brown-Cunningham, there are some parishes that will be losing some income in the interim because they had a high rate. She pointed out that there are other parishes, however, that were operating at a lower rate, but will now see an increase in their building fees.

The CEO noted that in another two or three years, every municipal corporation will be on the same level, which is in keeping with moving towards ensuring that persons doing business will be able to know beforehand what the charges are.

“We will be starting our community meetings and consultations, and we will be taking this message on the road for persons to be properly informed about the new changes and charges as it relates to building fees,” she added.