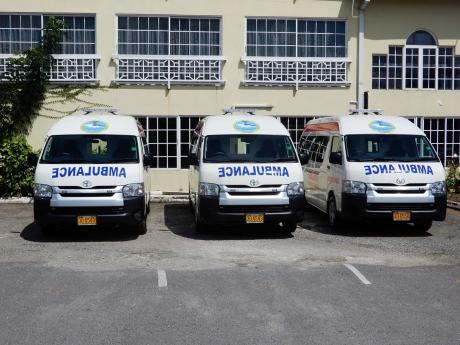 Carl Gilchrist
The three ambulances that were handed over to the Port Maria and Annotto Bay hospitals.

The North East Regional Health Authority (NERHA) has strengthened the ambulance capacity of the region with the purchase of three new ambulances, costing $42 million.

The three units were handed over on Friday in a ceremony at NERHA’s offices in Ocho Rios, with two being assigned to the Port Antonio Hospital and one to the Annotto Bay Hospital.

“These ambulances were very necessary because we had complaints many times about people not being able to be transferred to different facilities, so we thought that it would be the right thing to do,” NERHA chairman, Tyrone Robinson, told The Gleaner.

He added: “We acquired these from our budget. Per unit, we’re looking at about $14 million, so we had to squeeze the budget real hard for three of them.

“We chopped a little bit here and there to be able to fit it in the budget, but it’s worth it” he said.

Regional Director Fabia Lamm pointed out that with two additional units, for a total of three, the Port Antonio Hospital would have solved its transportation problems. Regarding the Annotto Bay facility, another unit will be provided during this financial year. The St Ann’s Bay Regional Hospital has a fleet of six ambulances, which is considered satisfactory.

“In the next financial year, we will review what we offer in our primary care services,” Lamm said.

Meanwhile, the chief executive officers of the two institutions have expressed delight at the receipt of the new units.

Althea Gardner, CEO at the Port Antonio Hospital, said: “Indeed I am elated to be receiving two ambulances.

“We do a lot of referrals, and having two additional ambulances will certainly help to further manage the care given to our patients on a daily basis.”

And Dennis Morgan, CEO, Annotto Bay Hospital, said “I am so excited to be receiving this ambulance on behalf of the patients and citizens of Annotto Bay. Annually, we transfer 700 patients to go get diagnostic treatment in Kingston and St Ann’s Bay. We need more, but we are very appreciative of it.”