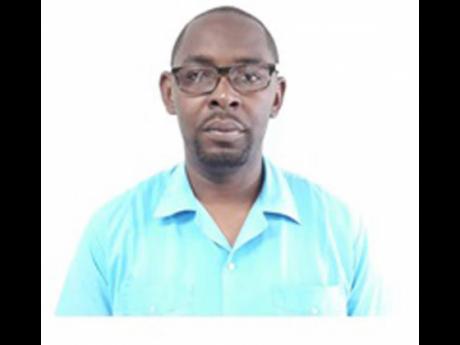 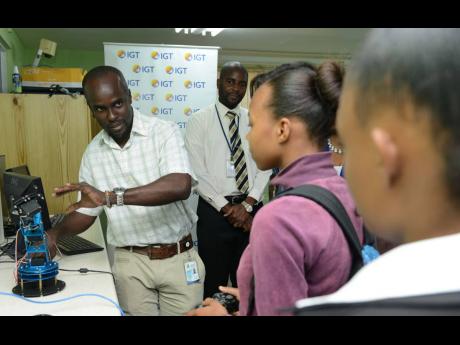 PauI MuIIings
Sheldon Glen (left), technology specialist at Northern Caribbean University, explains the capabilities of a miniature robotic device to students of the Women’s Centre Foundation of Jamaica during an IGT After School Advantage Technology Tour. 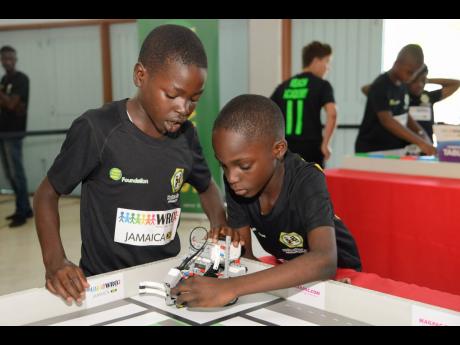 Shorn Hector
Shorn Hector/Photographer Akeem Hunter of Allman Town Primary (left) and teammate Kahlil Edwards take their robot for a test run during a break in the competition at the National World Robot Olympiad held at The University of the West Indies on Saturday, April 27.
1
2
3

United States President Lyndon B. Johnson, in his remarks upon signing the Bill Creating the National Commission on Technology, Automation, and Economic Progress in 1964, stated, “Automation is not our enemy. Our enemies are ignorance, indifference, and inertia. Automation can be the ally of our prosperity if … we will set our course wisely after proper planning for the future.”

Amazon, the great giant in the e-commerce business, continues to set record-breaking sales with the integration of robotics automation in their business processes. Amazon acquired Kiva Systems, a warehouse robotic company, for US$775 million in 2012, and two years after, introduced 15,000 warehouse robots. By the end of 2016, the numbers of robots were tripled, and the workforce was approximately doubled, according to the Statista report published in The Seattle Times.

The net sales increased by approximately 31 per cent in 2018 over a one-year period to US$232 billion. Disappointedly, none of the reports I read on the Internet spoke to productivity levels or improvements. Efficiency and meeting customer demands seems to be the priority in the short term and medium term, but if productivity improvement is not a higher priority, increase in annual revenue may not sustain higher profit in the long term.

Meeting customer demands in a timely manner is a requirement for business to be efficient, competitive and profitable. As the demand for higher-quality goods and services increases, workplaces may need to integrate automation and robotics technology in their business processes. Integration of technology must be strategic and implemented on a phase-by-phase basis parallel to traditional process to reduce the risk of not meeting customers’ demands. In the case of Amazon, 15,000 robots were introduced annually over a three-year period. Only seasonal holiday employees’ jobs were reduced while full-time employees were increased.

The International Society of Automation ( www.isa.org) defines automation as “the creation and application of technology to monitor and control the production and delivery of products and services”.

The Institute of Electrical and Electronics Engineers ( www.ieee.org) states that robotics “include intelligent machines and systems, whereas automation includes the use of automated methods in various applications to improve performance and productivity”.

Based on these two definitions, the major purpose of integrating automation into business processes is to monitor and control the production at an improved productivity level. Therefore, demands and service levels should be met with higher productivity levels for the business to be competitive and profitable over the medium to long term.

Automations have several disadvantages compared to human or manual process. These include very high initial capital investment, low versatility, low employment of low-skilled workers, limited flexibility in customised applications and the absence of cost-effectiveness where production volume is low.

Is Jamaica ready for integration of automation and robotic technology integration?

Government debt-to-GDP in Jamaica averaged 126.57 per cent for the period 1980-2017, according to www.tradingeconomics.com. Minister of Finance and the Public Service Dr Nigel Clarke, speaking at the Pension Funds Association of Jamaica’s annual luncheon on May 16, 2018, stated, “At the end of this financial year (2018), we are projecting that for the first time in this century, the debt-to-GDP rate is going to go below 100 per cent.”

For Jamaica’s debt-to-GDP ratio to reduce significantly over the short to medium term, integration of industrial automation in manufacturing processes and business processes needs to be explored. Jamaica must produce more and be more productive to be competitive with higher inclusion of local resources. This is where automation will play a role in meeting higher local and export demands.

If Jamaica fails to integrate advanced automation systems in the production of goods and services, it is unlikely that the Government will realise the goal of growing the economic by five per cent in four years. Jamaicans have a great fear of higher levels of automation and robotics, similar to other countries, but as in the case of Amazon, there was increased use of automation and increased employment. Is Jamaica ready for increased use of robotics technology and automation?

Next week, we will look at Part Two.

- Junior A. Bennett is a lecturer in industrial engineering at the University of Technology, Jamaica. Email feedback to columns@gleanerjm.com.