More emphasis should be placed on Spanish as second language, says embassy official 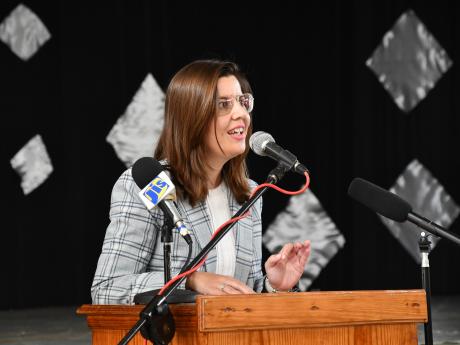 Charge d’Affaires at the Embassy of Spain, Victoria Garcia, addresses students during the Ministry of Education, Youth and Information (Region 4) Day of Excellence (Dia de Excelencia) Primary School Spanish Competition, which was held at the St. John’s Methodist Church Action Centre in St James on May 16, 2019 - Contributed photo

Charge d’Affaires at the Embassy of Spain, Victoria Garcia, says more emphasis should be placed on Spanish as a second language to increase the marketability of Jamaican students.

“One of the areas that could lead you to excellence is the study of Spanish. The motto of the Embassy of Spain is ‘Spanish Matters’, but this is not just a motto, it is a reality. Spanish matters for your future,” Garcia said.

“Together with other skills, it will allow you to grow both culturally and spiritually, and will create a right path towards your future. Spanish is very important in the world today and it is strategic and crucial for Jamaica,” she added.

Garcia outlined that while Jamaica’s dialect (patois) helps citizens to express their identity, speaking Spanish as a second language can open up new opportunities for the country.

She also reminded students that Spanish culture is a part of Jamaica’s history.

“Furthermore, Spanish matters for Jamaica because you are surrounded by Spanish-speaking countries. That means more than 70 per cent of the population in the Caribbean are Spanish speakers; therefore, Spanish is good for strengthening ties, friendships and economic opportunities for Jamaica (which) enjoys a central location in the Caribbean and should profit from it,” the Charge d’Affaires pointed out.

The event saw primary schools from across Western Jamaica competing in the categories of poetry, drama, song and dance, as well as a booth contest, for which students showcased the cultures of various Spanish-speaking countries.

The overall winner of the performing aspect of the competition was Chetwood Memorial Primary School, while Savanna-la-Mar Primary won for best booth.