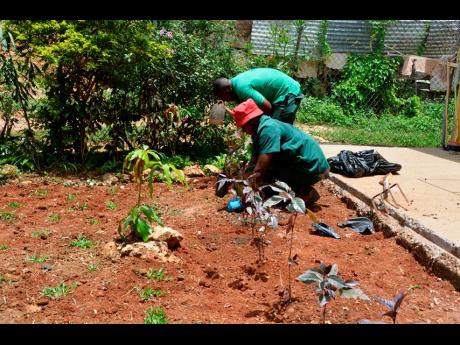 Janet Silvera
Two members of the RIU team redoing the garden at Refuge of Hope in Albion, Montego Bay, days ahead of Labour Day.

Citing the importance of being good corporate citizens, RIU Palace Jamaica and RIU Reggae, both flagship brands of RIU Resorts, have thrown their support behind two much-needed charities in Montego Bay.

The Refuge of Hope Night Shelter in the inner-city community of Albion and the Women’s Centre of Jamaica Foundation at Peter Pan Avenue, Brandon Hill, will both be receiving regular assistance from the hotel giant, a gesture the administrators have been calling “much needed and greatly appreciated”.

“We have done an assessment at both locations and will make available a number of items immediately,” explained RIU’s Carmen Aranda.

“At the Refuge of Hope, we will be putting together the combination of dining plates, chairs, blankets, shower curtains, cleaning products, sun beds, clothes, and shoes. In addition, we will be installing two doors, new night stands, and also storing cabinets,” Aranda told The Gleaner days ahead of the country’s annual Labour Day activities.

Aranda said that work on the two projects would extend beyond Labour Day into the longer term. According to her, RIU was impressed with the efforts of Refuge of Hope in reaching out to the homeless in and around Montego Bay and “felt that we had to get on board” to help with “whatever assistance”.

“This is not just a one-off thing; we will be staying with this Refuge of Hope project where Riu will continue to contribute, ensuring they will have their quarterly supply of much-needed items such as linen and toiletries.”

Both projects are valued at $500,000 initially, and spend over the long term will be much better, predicts Frank Sondern, general manager of both resorts.

In the meantime, Maria Isabel Lemas, the other member of the RIU team, said that the Women’s Centre, which provides a healthy environment for learning for young pregnant women who are out of the regular school system, will be receiving some immediate assistance in the form of an infrastructural upgrade, including the setting up of a play area for children in the facility’s backyard.

In addition, the hotel chain will be donating clothes, kitchen items, mattress covers, a picket fence, paint, fixing up the front garden and installing swings for children, said Lemas.

Just like the Refuge of Hope, RIU will continue to contribute and adopt the Women’s Centre for future projects and quarterly donations.

“We also realise that a number of the women at the centre have young children, so we have taken that into consideration by making provisions for them,” added Aranda.

During a visit to Refuge of Hope by The Gleaner, one of the administrators said that the intervention of RIU couldn’t have been more timely, saying that it was a fillip and motivator for the group.

“We cannot begin to thank RIU enough,” she said. “It takes a lot of resources to keep a facility like this up and running, and I can tell you that this kind of assistance will go a long way in helping to make the lives of the people at this facility better.”