To Seaga with love, from Hazel Smith 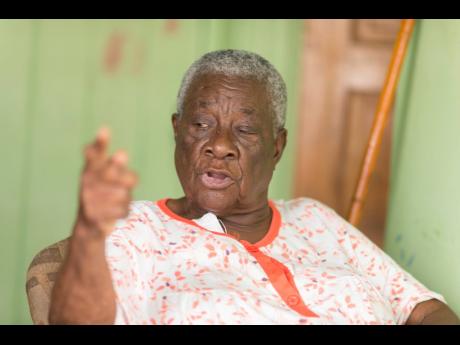 She misses him and longs for the days when he ruled as prime minister, but she has had more than a lifetime of personal and professional ­memories to cherish.

She is Daisy ‘Hazel’ Smith, retired auxiliary worker, and he is Edward Phillip George Seaga, former prime minister and Jamaica’s longest-serving member of parliament, from 1962-2005, in Western Kingston, a seat the Jamaica Labour Party (JLP) has held since Independence.

Relaxed and seated on her verandah in Tivoli Gardens, she allowed herself the luxury of time travel.

“When him come here to West Kingston, him was a young, vibrant man, and yes, I was young, because him is 88 going 89, and me is 87, so we coming up from them time deh. Him was a good young man coming up and we always deh behind him. We did love him fi him whiteness because him do good fi wi,” she said in a tone implying that the interview was over.

But we had just started, and there was so much more to find out as we delved into the past.

Seaga, a straight-talking ­political representative who rose from ­minister of development, to ­opposition leader, and later head of government, had used state funds to convert Back-o-Wall, a gritty slum, into Tivoli Gardens. Tivoli, a hodgepodge of multistorey buildings and ageing infrastructure, has a chequered past, its narrative swinging from cultural and sporting melting pot to criminal enclave with notorious badmen.

Smith, though, has nothing but praise for Seaga.

“What more them want him fi do? Him do everything fi we a West Kingston, everything. Take we out a poverty, one-room room weh everybody come outta the house and go a pipe when you a wash, and from there to two-bedroom, living room, bathroom and toilet and kitchen under one cover. Him say parents with children get two bedroom, one fi husband and wife,” she recalled.

“Is pure old car and garbage, and him turn it inna residence where we can live, and live comfortably. Him want the place to ‘come to’, so him break it down and build houses fi poor people. All me sit down here, is Mr Seaga mek me can sit down here, getting me little pension that me can live ­comfortable at my age.”

The octogenarian, in her nostalgia, remembers her days of taking food to workmen at Wellington Street, and credits Seaga for the transformation of Tivoli with a raft of construction projects.

“Him build a school over there and call me and send me over there to work, ancillary work in the canteen. Health centre, school, training centre, we have everything down here to our comfort. So we miss him to we heart,” said Smith, before showering praise on Seaga mentee Desmond McKenzie, one-time councillor and current MP of West Kingston.

Still, nothing can erase the kindness Smith says she felt at Seaga’s hands and for which she will be eternally grateful. Chief among them is the memory of how the former prime minister intervened in securing caregivers for her seven children while she worked.

“Me couldn’t get anybody fi look after them and him say mi must take them over the Kiwanis Centre and make Miss Lady over there look after them, and if I come 8 o’clock a night, she must keep them until 8 o’clock,” Smith told The Gleaner.

As she reflects on his legacy, Hazel Smith blames residents for not building on Seaga’s ambitious vision for Tivoli Gardens.

“Look pon the house weh we family mash up, we nuh build pon it, and that make him look bad. All 20 a we live inna one house. Anno fi him fault, because the Tivoli of today is not the Tivoli of 30 years ago. If we did live by Seaga plans, you could come and sit and enjoy the cool of the breeze, the atmosphere. We have nice centre over there so, dancing, culture a gwaan. Look how over deh stay, the centre right ya so,” Smith said, disappointed.

She spends most of her days on the verandah, unable to go much farther, but admits that in her heyday she was a Labourite loyalist. Seaga has been ailing with cancer for some time and is battling for life in a Florida hospital. Now, she wants to be able to pay tribute to him one last time.

“When Bustamante did dead, rain start pon me and end pon mi up a Duke Street, up a Union Hall, so we would want the same thing happen with Seaga, too. And mi a beg God fi gi him likkle more time.

“... Weh him deh, me can’t reach deh so. But a him make mi can eat and drink, because me can come and sit down here and wait upon the month fi come fi get me pension.”