Judge temporarily halts Mississippi law that would ban most abortions 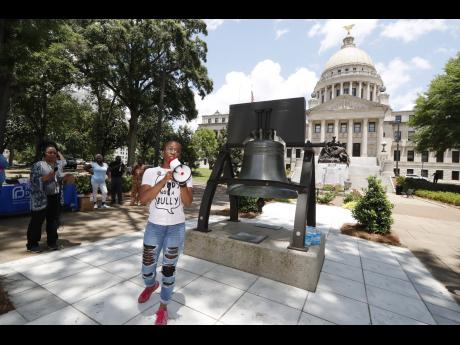 Amanda Furdge, a resident of Jackson and a mother of three boys, relates her experience seeking an abortion in the state. She was addressing abortion rights advocates at the Mississippi state Capitol during a rally earlier this week to voice opposition to the law that would prohibit most procedures once a fetal heartbeat can be detected

JACKSON, Miss. (AP) A federal judge in the United States (US) has temporarily blocked a law in the state of Mississippi that would ban most abortions once a fetal heartbeat is detected, at about six weeks of pregnancy.

The ruling, which was handed down by US District Judge Carlton Reeves yesterday, stops the law from taking effect July 1.

“Here we go again,” Reeves wrote in his decision yesterday.

“Mississippi has passed another law banning abortion prior to viability.”

Viability is generally considered to be about 23 or 24 weeks.

Mississippi is one of several states that have pushed this year to enact bans on early abortions.

Emboldened by new conservative Supreme Court justices, abortion opponents are looking for ways to challenge the landmark 1973 ruling that legalised abortion in the US.

Reeves heard arguments from attorneys for Mississippi’s only abortion clinic, who asserted that the new law would effectively eliminate all abortions across the state because cardiac activity is often first detectable when many women may not know they are pregnant.

However, lawyers with the state attorney general’s office, in their response, argued that the law should be allowed to take effect because it is not a complete ban on abortion but, rather, a limit on when the procedure could be done.

Reeves, in his decision, said the new law “prevents a woman’s free choice, which is central to personal dignity and autonomy.”

“This injury outweighs any interest the State might have in banning abortions after the detection of a fetal heartbeat,” the judge wrote.

Mississippi’s Republican Governor Phil Bryant said he was disappointed with the ruling.

“As governor, I’ve pledged to do all I can to protect life. Time and time again the legislature and I have done just that,” he said in a statement.

The state of Alabama recently signed a law that banned most abortions.

Georgia, Kentucky, Louisiana, Mississippi and Ohio have enacted or are close to approving measures banning abortion once there is a detectable fetal heartbeat.

The law in the state of Kentucky was temporarily blocked by a federal judge in March.

The others are expected to face legal challenges.

Reeves will hear arguments later about the question of whether the six-week ban is constitutional.

The Mississippi law says physicians who perform abortions after a fetal heartbeat is detected could face revocation of their state medical licenses.

It also says abortions could be allowed after a fetal heartbeat is found if a pregnancy endangers a woman’s life or one of her major bodily functions.

Senators rejected an amendment that would have allowed exceptions for pregnancies caused by rape or incest.