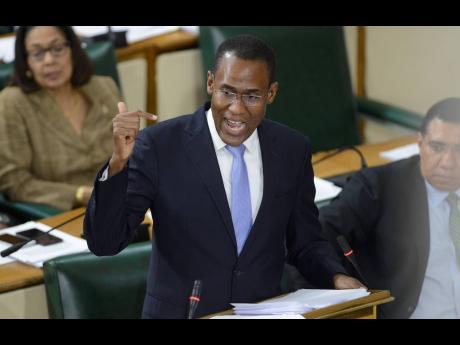 Shorn Hector
Financial Minister Dr Nigel Clarke, under whom the Audit Commission falls, has been mum on its future.

The Government is to disband the Audit Commission, an oversight body it created 13 years ago to monitor the performance of public-sector audit committees and make reports to the Ministry of Finance and the Public Service.

It is not clear whether the functions will be subsumed into an existing entity or redeployed to another entity.

Word came last week – more than a month after The Sunday Gleaner enquired about the status of the audit watchdog, which was established in 2005 – that the body is to be scrapped under the Government’s “restructuring and rationalisation” programme.

The confirmation follows information that the commission, which had oversight responsibility for 31audit committees within the public sector, “has not met for some time and was not operational”. Further queries were referred to the Ministry of Finance. That ministry’s public relations manager, Elaine Oxamendi, acknowledged receipt of the questions and promised to provide responses.

To date, none has been forthcoming.

The Audit Commission has been flagged for “heavy-duty criticisms” for failing to live up to its mandate, which has resulted in the Auditor General’s Department “cleaning up financial mess at government agencies”, a source told The Sunday Gleaner.

According to the source, the commission has been reduced to “data collectors which were simply writing reports to say that different agencies were, or were not, compliant with reporting requirements”.

Said the source: “The commission would examine the reports pursuant to their mandate, and then report to the finance ministry. But, how could you have a functioning audit commission in the – Ministry of Finance of all places – and what happened at Petrojam happened?” said the informant during a Labour Day exchange.

Repeated attempts to reach Finance Minister Dr Nigel Clarke were unsuccessful last week, but an official who spoke on condition of anonymity directed The Sunday Gleaner to the September 2016 GOJ policy document on the Categorisation and Rationalisation of Public Sector Bodies.

“The Government of Jamaica is embarking on public-sector reform, merging state entities and reintegrating others to their parent ministries. These have nothing to do with performance, but with effiency of government. The service being provided doesn’t go; they are merely structured more efficiently. To say that they are being repositioned because of non-performance would not accurately represent the thrust of Government of Jamaica policy,” the official said.

Opposition Spokesman on Finance Mark Golding admitted that he was not seized with the facts of the situation, but made it clear that it was not the time to disband the commission.

“There has been an unprecedented spate of cases of the worst kind of administration in the public sector, with massive breaches of everything. I don’t think the society wants to see a weakening of the structures of accountability. If they are not working as they should, they need to be made to work,” Golding said Friday.

“If there is a resource problem, give them the resources to do their work. Clearly, a lot of what went on at the NESoLs, Petrojams, Universal Service Funds of this world [was] because there was no effective audit committee functioning,” said Golding, referencing state agencies that have been rocked by allegations of nepotism, overspending and leakage.

The Audit Commission has been ringing its own death bell since 2015 when in its annual report tabled in the Upper House, it complained bitterly about the slow pace at which management in the public sector responded to audit queries, stating that in some instances, comment was not forthcoming. It also complained of a lack of resources that hampered its ability to carry out its mandate.

In its report for the year ending March 31, 2014, and tabled as a ministry paper, the commisssion said that the quality of responses from some management needed improvement.

Addressing a blatant disregard of requests for more and better particulars from public-sector audit committees, the commission reported that the “lack of accountability by persons in positions of authority and the failure to enforce sanctions to ensure accountability have contributed to weak or ineffective systems of internal controls, resulting in a proliferation of non-compliance and breaches within most government entities”.

The commission said that of the 23 annual reports received from audit committees, 80 per cent reported that “outstanding management response was a recurring issue”.

“This is an area that needs to be immediately addressed by the accounting officers and senior management as a lack of appropriate action by management will result in the perpetuation of the risk exposure, which may have significant financial implications on Government’s scarce resources,” declared then Finance Minister Dr Peter Phillips, currently the opposition leader.

Golding said the need for a more effective public sector is recognised and the transformation process is supposed to get us there.

“But, it can’t be by dismantling structures that are clearly necessary. If it is not functioning as it should, is it a question of design or resources. Fix that, but it can’t be that we are going to eliminate the body which makes sure that audit committees in the public sector are functioning as they should,” he argued.

The Government said the objective is to create a public sector “that is efficient, effective, accountable and delivers quality service that will redound to the growth and development of Jamaica”.

When it was created in 2005, it was hoped that Government would focus on its core functions, “as it divests itself of non-core activities and seeks to strengthen the functions that it needs to perform”.

The commission was enacted as a body corporate with the 2009 amendments to the Financial Administration and Audit Act, which resulted in the statutory establishment of its functions and authority. The commission was reconstituted on July 1, 2011, with six members appointed by the governor general, with the solicitor general or his designate being an ex officio member.