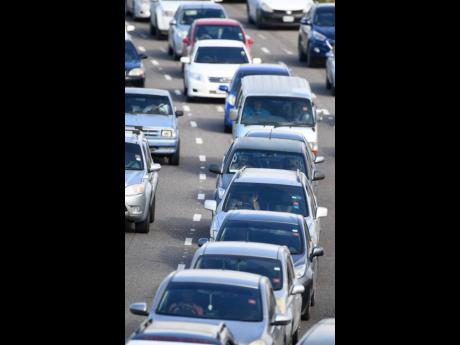 Ricardo Makyn
Motorists in heavy traffic on Marcus Garvey Drive transferring from the Portmore leg of the toll road. Illiterate motorists may soon have a legitimate chance to have driver’s licences.

Jamaicans who are functionally illiterate could soon have a better chance of securing a driver’s licence, as the Island Traffic Authority (ITA) has been petitioned to modify the examination that is used to measure road-safety knowledge.

This appeal was made by members of the National Road Safety Council (NRSC) who were recent guests at a Gleaner Editors’ Forum. Jamaica’s adult literacy rate was 87 per cent up to 2016.

“We have got to find a way to include them and bring them into the system, because the regular training where you have to pass the Road Code, they cannot meet that standard,” said executive director of the NRSC, Paula Fletcher.

“We have to have motorcyclists tested in a way that they don’t have to be able to write a dissertation, but they know the language of the road, because as a country, we have failed our people if we don’t have a certain level of literacy, a basic level of literacy, but we can’t criminalise them,” said Fletcher.

“What we have been saying at the council and the Ministry [of Transport and Mining] has acknowledged that the Island Traffic Authority can actually modify, and we are working with JFLL (Jamaican Foundation for Lifelong Learning) to find a way to let them be able to have a level of competency and to be tested accordingly. We have got to find a way to bring them into the system,” she argued.

Acting director of projects at the Ministry of Transport and Mining, Joan Wynter, confirmed that the law allows for the ITA to modify the exams.

“So if you are illiterate and they find out from you apply, they would be able to modify your test. It could be through observation, but we cannot not allow somebody who has a learning disability but needs to make a living because he has children that he has to provide for and maybe the only skill he has is to be employed as a driver. All of that is under consideration for the Island Traffic Authority to be able to modify the test,” said Wynter.

She said that these changes will be considered under the new Road Traffic Act.

“We are currently working out details in the regulation. We are maybe about 90 per cent complete and we have a big document of almost 300 pages that we are planning to have a retreat to discuss,” she said.

Deputy chairman of the NRSC, Dr Lucien Jones, said that the council recently had a research document presented to them by Johns Hopkins University that made several recommendations. The research was funded by the Government of Jamaica through the Office of the Prime Minister, and the International Automobile Federation.

“In areas where you have low literacy, develop pictorial driver’s licensing tests to measure road-safety knowledge,” was one of the recommendations made.

“The recommendation that is being made has the authenticity of research done by a famous university as far as the low literacy rate in Jamaica is concerned,” Jones said.