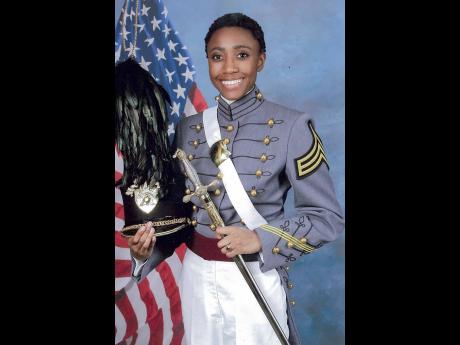 When young Kate Campbell decided that she wanted to pursue a career in the United States Armed Forces, she wasn’t sure how to break the news to her Jamaica-born parents.

Not that she wouldn’t have “their full support”, but Campbell feared that they, “being parents”, would be somewhat concerned that their youngest child might be flirting with danger.

“My loving parents who are from the parish of Portland, Jamaica, have always been supportive of my decisions,” she told The Sunday Gleaner in a telephone interview last week.

“This was, however, something entirely different, and maybe for the very first time I wasn’t exactly sure as to how they would react, especially Mom,” she added, with laughter.

Well, break it she did, and, now, four years later, Campbell will be a part of history as one of the record 34 black women who, yesterday, graduated from one of the most prestigious military academies in the world, West Point, in New York.

Vice-president of the United States, Mike Pence, delivered the commencement address to the expected 950 cadets who will be later commissioned as second lieutenants in the US Army.

“Cadet Campbell has been one of our outstanding cadets … a very hard worker,” explained Katie Felder, public affairs specialist in the Media Relations Division at West Point.

“We are very proud of her achievements along with her historic class of graduates.”

Campbell recalled that it was as early as age 15 that she felt certain that the military was her calling and that her career path would take her through West Point, however daunting the task might have seemed.

Why? Because as much as West Point is the most well known of all commissioning programmes in the United States and open to civilians and to current enlisted members of the military, “it is the hardest to qualify for”.

Also, it wasn’t lost on her that competition to get in was fierce, considering that West Point cadetship includes a fully funded four-year college education. Also, tuition, room, board, medical and dental care are provided by the US Army.

But probably the most challenging part of the application process, for Campbell, was that it also involved a pre-candidate questionnaire and nomination from a member of the US House of Representatives, or a US senator.

“It was a rigorous application process and I went about it entirely on my own,” she noted. “Of course, the concern was still there that my parents would oppose my desire of wanting to go to a military academy.”

Campbell would also apply for West Point’s Summer Leadership Programme at West Point, but only revealed that information to her parents “a few days before I learned that I had been admitted”.

Campbell’s mother Carlene and father Lloyd remembered how shocked they were to learn of their daughter’s ambitions.

“Shock might be an under-statement,” explained Carlene, who hails from Windsor Forest, Portland.

“We are very proud of Kate. She is an inspiration, not just because of her unbelievable accomplishments at the military academy – West Point – but because she is such a humble and caring person,” Carlene told The Sunday Gleaner.

Campbell would go on to impress her then Congressman from Maryland, now United States Senator Christopher Van Hollen, whose panel unreservedly supported her nomination for a place at West Point.

Campbell said that the last four years at West Point have been nothing short of remarkable, calling her batchmates “my family away from home”.

“I wouldn’t change this experience for anything in the world. I feel honoured to be a part of history and to share this moment with my fellow cadets,” she beamed.

“To every young girl out there, even over there in Jamaica, never lose sight of your dream and do stay the course. There is no better feeling than to know that you have done all you can to achieve your goals,” Campbell further added.

She will be graduating with a Bachelor of Science in English and will be fulfilling her commitment to the US Army as an officer.