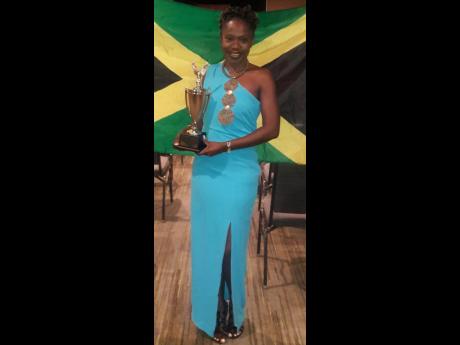 Jennifer Allen
Faith Ellis displaying the trophy she won for being adjudged the Caribbean Champion of Public Speaking at the Toastmasters International District 81 Annual Conference in Bonaire, the Caribbean part of the Netherlands, recently.

Her speech, which focused on realising your dreams and the price we pay for those dreams, earned her the top prize, while second place went to Khalifah Bastain from Trinidad, and third place to Tris Ann Richards from St Lucia.

From a field of 10 contestants, the Vocational Training Development Institute lecturer and distance runner, who has been racking up marathon races around the globe, wowed the judges to claim the prestigious trophy and the opportunity to represent the Caribbean at the 2019 Toastmasters International Convention in Denver, Colorado, USA, where she will vie for the World Championship of Public Speaking top prize.

Ellis, who has been a member of Sagicor Life Jamaica Toastmasters Club for the past seven years, says she is passionate about reading, travelling and entertaining. She enjoys meeting people from different cultures and loves the great outdoors. No stranger to competition, having won numerous club, area and national contests before, she also holds the winner’s trophy for the Caribbean Humorous Speech Contest at the 2016 Toastmasters District 81 Conference in Curaçao from a field of 12 contestants.

As she turns her attention to face the other world’s best, Ellis says she looks forward to representing her club, country and district to the best of her abilities in Denver. Drawing on the words of clubmate and distinguished Toastmaster, Shirley Daley, she feels proud to represent the Caribbean because “we (as Caribbean nationals) are not separated by water, but rather, linked by water.” She says she is still shocked, humbled and grateful for the win after going through a tough and intense round of competition, but she is happy to now bask in the beauty of Bonaire and the opportunity to meet so many Toastmasters from the region.

Ellis extended thanks to her club, Sagicor Life Jamaica Toastmasters Club, which celebrates its 30th anniversary this June, for its outstanding support throughout the rounds of competition.