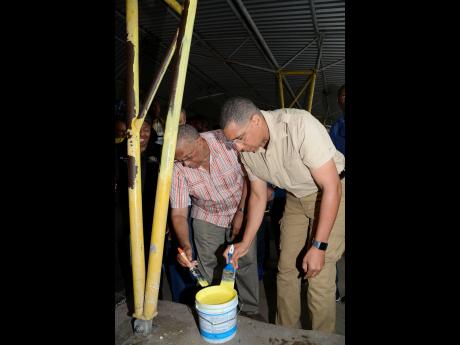 Even as scores of people turned out at the Papine High School on Labour Day to make preparations for the construction of a perimeter fence to address the institution’s immediate security concerns, principal Leighton Christie, while expressing gratitude, says the school’s fledgling agricultural science programme is in need of support.

“We have a large expanse of land, as you see, and we would need some help to develop the area. Currently, we are in broiler production, we do vegetable and now we are doing bee, and we would need help to develop the other areas because, as you notice, it’s a large expanse of land and it takes a lot and as a school we don’t have the resources,” Christie said in an interview with The Gleaner.

The high school, which has a population of 1,300 students, was chosen as the national project for Labour Day, which was observed under the theme ‘Child Safety … It’s you, it’s me, it’s all ah we!’

“Labour Day is a meaningful day. Before, we used to celebrate something called Empire Day, but we changed that to signal that we are labouring for our own independence, to create our own value dignity and self-worth. We change that as well to acknowledge the role labour played in starting the movement towards independence and national awareness. The labour movement is the start and is very integral to who we are as Jamaicans,” he said. Meanwhile, Leader of the Opposition Dr Peter Phillips said Labour Day is important to the promotion of national values.

“It embodies the value of self-reliance on the part of communities that people can do, and should do to help themselves and build up their communities, whether it is a school community or it is a residential community, or just some part of an urban area or a rural area. We need to recognise that we as citizens hold the future in our hands. It also embodies the sense of civic responsibility without which no nation can be properly built; and it embodies the spirit of volunteerism, which many times people ignore but which should never be forgotten,” Dr Phillips said.