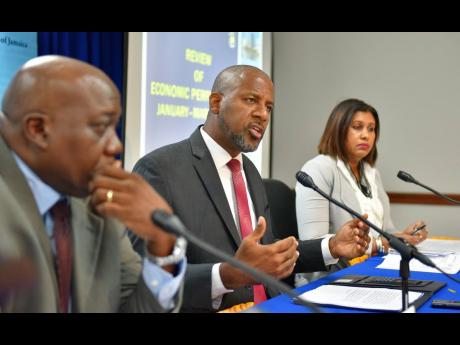 Real estate renting and business activities, and hotels and restaurants were among the sectors recording the highest increases in employment among the 1,232,700 persons holding jobs as at January 2019.

This was disclosed by Planning Institute of Jamaica (PIOJ) Director General Dr Wayne Henry, who also indicated that the unemployment rate fell by 1.6 percentage points to eight per cent, relative to January 2018.

He was speaking at the agency’s quarterly media briefing at the PIOJ’s head office in New Kingston on May 22.

Data from the Statistical Institute of Jamaica (STATIN) indicate that the number of individuals employed in real estate renting and business activities increased by 9,600 to 91,600 as at January 2019.

The number of job holders in the hotel and restaurants sector climbed to 106,900 persons, an increase of 8,000.

Other sectors recording notable increases, Dr Henry said, include the wholesale and retail trade, which saw the number of employed individuals increasing by 6,500 persons to 253,500; and mining and quarrying, up 3,300 to 7,900 persons.

Meanwhile, Dr Henry said that the overall number of employed individuals as at January 2019 represents an increase of 28,600 persons. Additionally, he said that the total labour force grew by 8,400 persons to 1,340,200.

This, Dr Henry pointed out, is consequent on a decline in the number of individuals outside this grouping by 9,000 persons.