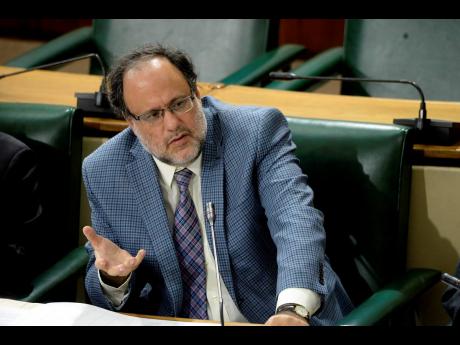 Puzzled by figures on an invoice presented to the state-owned entity by Main Event Limited for a banquet as a part of a four-event jamboree for its 35th anniversary, members of the Public Accounts Committee of Parliament yesterday was outraged.

However, the figures and notes presented to the committee showed cost allocated to this banquet per head at $4,800.

Committee member Peter Bunting pointed out that there was a discrepancy with the figures as presented before the committee, which is conducting a review of the auditor general’s report into the operations of the Petroleum Corporation of Jamaica (PCJ).

“ … It seems to be closer to $38,947, so I don’t know who is the technical person that did this division, but they are putting a cost per head of $4,800, but [by] my calculation, it’s $38,947 per head, which seems more in keeping with the way Petrojam has expended money on birthday parties, etc,” Bunting said as he demanded an explanation for the conflicting figures.

Petrojam Public Relations Officer Latoya Pennant explained the cost per head was for the catering aspect of the event and not the entire banquet.

She said $15.7 million included other costs, such as gifts for the awardees and other activities which would not have been be captured in a per capita fashion manner.

But Bunting insisted that he was looking at a total cost per person to put on the event, which triggered an admission from that he was correct on that premise.

“Extravagant in the extreme, in my view,” PAC Chairman Mark Golding chimed in, as other committee members smirked and shook their heads.

Another event, a family fun day, cost Petrojam $7,000 per head, with approximately 500 attendees. That event had an overall cost of $5.7 million, the committee was told. In addition, the state-owned oil refinery forked out $1,220 per head for approximately 120 persons at a church service.

“So, these numbers are quite misleading and all understated – substantially understated,” Golding stressed.

The overall budget for the lavish 35th anniversary celebrations was more than $30 million and four and a half times times what was spent to celebrate its 30-year milestone.

The PAC was told that after a hurricane caused the shutdown of several refineries in the United States, oil prices were set to sharply increase.

He said that at the time, Paulwell and the board called on the entity to hold the price of oil.