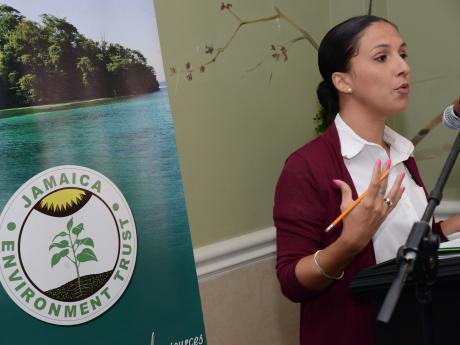 The Jamaica Environment Trust (JET) says it is growing “increasingly alarmed” at the activities of bauxite mining companies near the designated Cockpit Country Protected Area boundary.

According to Suzanne Stanley, Chief Executive Officer of JET, bauxite mining is expanding in Cockpit Country communities in St Ann and Trelawny which have been left out of the protected area.

“The absence of information from the government and these bauxite companies operating near the CCPA boundary has made what is already a bad situation, worse,” Stanley said in a statement today.

She said that residents of Gibraltar, Madras, Barnstaple in St Ann reported that they have observed the rapid expansion of the activities of the mining company Noranda Bauxite (New Day Aluminum) in their area over the last year.

She argued that bauxite mining is not only degrading their land and displacing residents, but that dust from the mining operations is also increasingly threatening their health and polluting their water supply.

The environment lobby group said that it has also received reports from Cockpit Country communities in Trelawny including Alps, Sawyers and Ulster Spring where Noranda is reportedly seeking a new bauxite mining lease.

According to JET, that mining lease will allow Noranda to mine bauxite right up to the edge of the cockpit country boundary.

JET bemoaned that repeated efforts to get information from government agencies on the cockpit country boundary and bauxite mining near the protected area have produced little results.

It said its September 2018 request for a copy of the agreement between the GOJ and Noranda from the Ministry of Transport and Mining using the Access to Information (ATI) Act has received no response.

Further, the lobby group said that the decision of the ATI Tribunal is also still pending on its  May 31, 2018, appeal regarding the Forestry Department’s failure to provide access to files used to create maps of the boundary.

These maps, it said, were presented in Parliament by Prime Minister Andrew Holness during his November 2017 announcement of the Cockpit Country boundary.

“The citizens of Jamaica deserve an explanation from the government about what is happening on the ground in Cockpit Country.

“It appears that little progress has been made towards protecting the Cockpit Country under Jamaican law, meanwhile bauxite mining is moving ever closer to the protected area boundary and threatening the welfare and livelihoods of surrounding communities,” said Stanley.