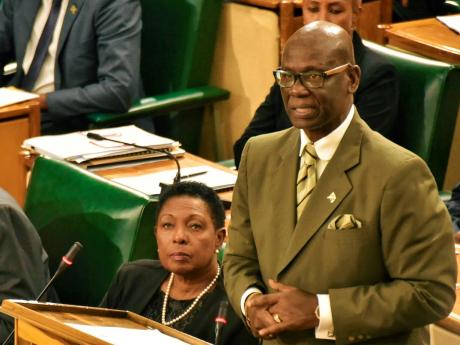 Minister of Local Government and Community Development, Desmond McKenzie, makes his contribution to the 2019/20 Sectoral Debate in the House of Representatives on May 28, 2019 - Contributed photo.

Local Government and Community Development Minister, Desmond McKenzie, had indicated that the new regime incorporates three rates for all categories of works which have been approved by local building authorities.

“These residential and commercial rates are a 50 per cent reduction of the current rates in the building bylaws. We want to ensure regulatory efficiency and ensure that the fees are manageable for homeowners and business people at every economic level as they pursue their development objectives,” the local government minister said.

These revisions are consistent with the government’s decision to harmonise the development approvals process.

McKenzie stated that the standardised rates, which emerged from discussions between the Ministry and local authorities dating back to last year, will improve the predictability of the development approvals application process, a critical International Monetary Fund benchmark.

Additionally, he said they will streamline the local authorities’ payment process of one per cent of the fees collected annually into the National Disaster Fund, as required by the Disaster Risk Management Act.

McKenzie further said that fees would also be revised to keep pace with “modern realities” and eliminate the prevailing situation where, contrary to building regulations, there are “substantial variations” in the sums charged by local authorities.

“These revised standardised fees will give local authorities the financial muscle to increase technical staff, procure new technology and do the necessary research to ensure thorough validation of applications, and increase the numbers of approvals within 90 days,” he added.

“It is expected that by 2021, all local authorities will apply the same building fees to the same categories of building applications islandwide,” McKenzie said.