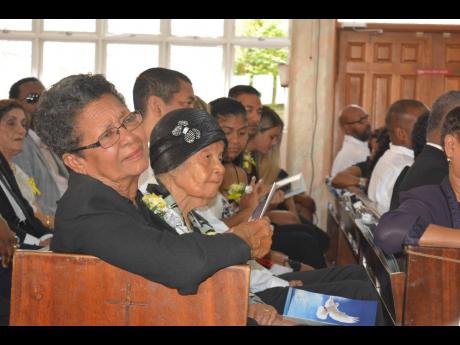 Contributed
Mrs. Novelette Tai listens attentively to tributes paid to her late husband, Aston. Beside her is Tai’s sister, Cynthia.

Hundreds of family, friends and well-wishers turned out to celebrate the life of the late businessman and philanthropist, Aston George Tai at the Andrews Memorial Seventh-day Adventist Church on Sunday, May 19.

In his tribute on behalf of the Jamaica Union Conference of Seventh-day Adventists, of which Tai was a member, executive secretary of the Union Dr Meric Walker described him (Tai) as a national church hero.

“The church has deacons, directors, pastors, presidents and other positions, but no church hero,” explained Walker. “However, based upon Aston’s gifts for mission which included among other things, selflessness, compassion, thoughtfulness, love, kindness, humility, respect, faithfulness to God, commitment to church and exemplary living, I believe in God’s book, he is a church hero.

“The Seventh-day Adventist Church in Jamaica”, Walker continued, “lauds the late Dr Aston Tai as a philanthropic icon for religious and social causes, and we salute him for his steadfast commitment to the poor. He was a giant of a man who was taller than his height, richer than his possessions, greater than his achievements, wiser than his time. His vision brighter than his sight, more powerful than his positions, and his circumference of influence wider than his circle of friends.”

In his tribute, Governor General Sir Patrick Allen described Tai as a true Jamaican patriarch whose life was one of “fulfilment and satisfaction lived to bring joy and blessings not only to his family, but the country at large.

“Mr Tai was generous to a fault,” said Sir Patrick.

Former principal of Hagley Park Preparatory School and a friend of Tai for more than 50 years, Juliet Scott, had the congregation in stitches when she described Tai’s kindness, saying he was one who did not “put his mouth in his pocket, but put his pocket into his mouth.”

“He did not only believe in church, he believed in the people in the building,” Scott continued. “He sat on many boards, and something I liked about him is that he was never fussy for church office.

“He was a down-to-earth person who loved the poor and the unfortunate, and he gave up his very all to help them,” she added.

He was the owner of the Jag Clarke Paper Co, which manufactured the Humming Bird series of exercise book. He was a justice of the peace for St Thomas and served on various boards, including those of the Jamaica Chamber of Commerce, Love 101FM, the West Indies Union Conference of Seventh-day Adventists, among others.