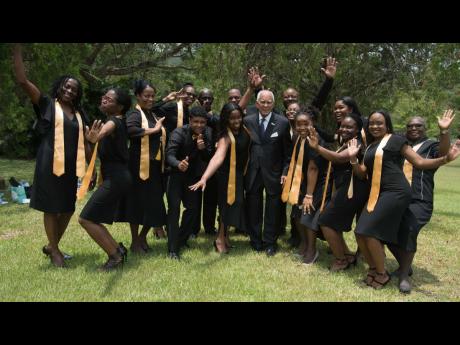 Contributed
Chairman of the ICWI Group the Hon. Dennis Lalor  (centre) shares a light moment with members of the ICWI Choir following a church service on Saturday, May 11 at the UWI Mona Chapel in Kingston - commemorating the insurance provider’s 50th Anniversary Celebrations.

The Insurance Company of the West Indies (ICWI) is steering its way en route to its 50th anniversary celebrations in June.

As the island’s first wholly Jamaican-owned insurance company, ICWI now stands as one of the region’s largest and leading insurance companies with locations in The Bahamas, British Virgin Islands, Cayman Islands, Turks and Caicos, St Kitts and Nevis, St Maarten, and Trinidad and Tobago. It began the milestone achievement with a church service at the Mona Chapel on May 11.

In his address to a congregation of employees, customers and well-wishers, Paul Lalor, president of ICWI, alluded to his father’s, ICWI founder and Chairman Dennis Lalor, vision for the company 50 years ago, and thanked all who contributed to the company’s success.

“The vision and courage of our chairman and his partners to come together 50 years ago to start ICWI with a commitment to excellence, and to making sure that people who came to work at ICWI would find the experience rewarding and developmental,” Lalor said.

“We give thanks for the loyalty of our customers because, ultimately, they give us the wherewithal to do all that we do,” he said.

In honour of the many philanthropic efforts of its founder and chairman, ICWI is focused on highlighting community and customers for the celebratory period, which commenced in May and will run well into June 2019.

Earlier in May, the insurance company hosted a pre-Mother’s Day Brunch for cancer survivors and ICWI Road Angel policyholders, which facilitated a donation of just under $700,000 to the Jamaica Cancer Society.

Other initiatives over the period include the motor and property insurance provider sharing road safety tips and fêting customers through in-branch executions. The company will also honour its employees from Jamaica and the region with an extraordinary blue-carpet affair on June 15 in Kingston.

“ICWI remains a trusted insurance provider for Jamaicans, consistently delivering quality products, backed by a team of credible and hard-working professionals who believe in serving all clients with dignity and exceptional service,” Lalor said.