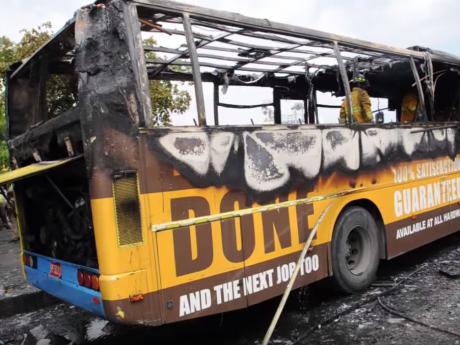 A JUTC bus that was destroyed by fire in downtown Kingston in April 2015.

The Jamaica Urban Transit Company (JUTC) is reporting that substandard workmanship by its staff appears to have contributed to the recent bus fires.

The issue has been under investigation by the bus company.

JUTC says preventative fire checks conducted over the past two weekends found instances of serious breaches including, but not limited to, fuel line being too loose beside a turbo and a rag being used to tie a hydraulic line, among other displaced connections in the engine.

“These breaches can cause spontaneous combustion when in operation mode and may have prompted at least two of the three fires. We are taking a zero-tolerance approach to the recent fires and have warned personnel that there should be no recurrence,” said JUTC Managing Director Paul Abrahams, adding that with the recent fires greater focus is being placed on quality maintenance of all units.

Abrahams said administrative sanctions following due process will be brought to bear on those found to be responsible for poor workmanship.

According to Abrahams, it appears there are efforts to undermine the operations of the bus company both internal and external.

In light of the recent fires, the bus company has established a Fire Prevention Team.

The JUTC explained that the team’s main objective is to ensure that all units are up to safety standards for the commuting public and that all procedures are adhered to.

Abrahams said that the fire team will report every week on the faults they have found and the corrective measures they have put in place.