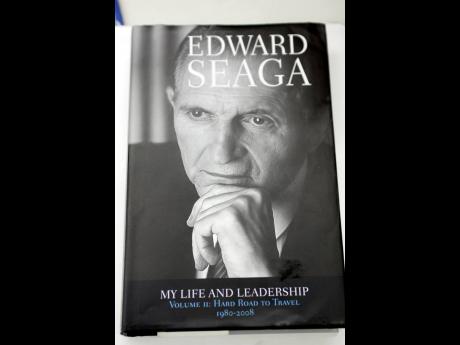 Urban Development Corporation (UDC) Chairman Senator Ransford Braham has expressed “a deep sense of grief and profound sadness” about the passing of Jamaica’s fifth prime minister, Edward Seaga, who established the state body in 1968 during his initial tenure as minister of finance and planning.

Seaga died on Tuesday in a Miami hospital, where he was receiving treatment for cancer.

“The chairman, board, and staff of the UDC are inspired by the legacy of such a leader who trusted the UDC with one of the most important tasks of his political career, the rebuilding of the Kingston waterfront and developing Ocho Rios’ potential for its waterfront,” said Braham, a government senator. “This project also led to the modernisation of Kingston Harbour, which brought Jamaica to the forefront of regional and international trade.”

Braham spoke of Seaga’s guidance in having the UDC spearhead the development of the Negril resort area.

He said that two-thirds of the choice real estate for development was acquired by the UDC at Seaga’s initiative to establish a land bank.

This included Orange Bay, which was declared the site for an innovative pilot shelter project developed and unveiled in 1983. Similar planned developments with major infrastructural work were undertaken, including 26 miles of roadway and water mains to open up the Hellshire Hills area of St Catherine, Bloody Bay, and Ackendown (Westmoreland).

Seaga’s reach extended to the UDC, and through the agency, the waterfronts of Kingston, Montego Bay, and Ocho Rios were developed into business, residential, port, and resort complexes.

In addition to the UDC, Seaga established, encouraged, promoted, or introduced several institutions that are integral to the Jamaican development landscape. These include the Jamaica Stock Exchange (1969), the Jamaica Unit Trust (1970), the Jamaica Mortgage Bank (1973), the National Development Bank (1981), the Agricultural Credit Bank (1981), the Ex-Im Bank (1986), and the Students’ Loan Bureau. The highly successful Jamaica National Investment Promotion Ltd (JAMPRO) was created by him in 1981.

Seaga, who was honorary distinguished fellow at The University of the West Indies, Mona, and conducted extensive research on child development and revivalist cults, has also been eulogised as a nation builder by Professor Dale Webber, pro vice-chancellor and principal.

Seaga had several scholarly publications such as Grenada Intervention: The Inside Story; Revelations: Beyond Political Boundaries, Lectures 2005-2009; Parent-Teacher Relationships, published by the Institute of Social and Economic Research, The UWI; and Revival Spirit Cults published in the Jamaica Journal. He donated his papers and memorabilia to the Mona library.

“A leader of strong conviction and purpose, his influence on the course of life in Jamaica is undeniable,” said Webber.

“He was a cultural icon, a strong leader, a champion of the oppressed. He was a man of action, and most importantly, a man of the people who had unwavering confidence in the ability of Jamaicans to overcome.”