The Holocaust of the Jews | Eva Schloss’ story – Part VI 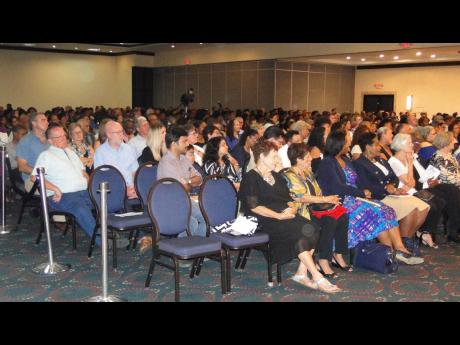 Paul H. Williams
A section of the capacity audience that turned up at The Jamaica Pegasus on April 2 to hear Holocaust survivor Eva Schloss tell her story.

At Birkenau concentration camp, Eva Schloss and her mother, Elfriede, whom she called Mutti, were selected to work in a workhouse called Canada, where they were to cut the lining out of the fur coats of the newly arrived prisoners.

They were to remove any hidden valuables found. They would take back bits of food they had found to the other inmates in the barracks. This was risky, but the biggest risk they took was taking a silver spoon to a nurse called Minni upon her request. Minni, a cousin of Mutti, was also a prisoner but was the wife of a well-needed skin specialist.

Because of possible suspicion, Schloss was transferred to another sorting area, where she would get a short break from work. One day while she was sitting outside eating her lunch ration and watching a group of male prisoners on the other side of the barbed-wire fence, she suddenly saw her father, Erich, from whom they were separated.

“I jumped up shouting, ‘Pappy!’ He looked at me with such amazement and delight that we wanted both to laugh and cry at the same time. We ran to the barbed wire that separated us. We could almost touch each other, but we did not dare to because it was far too dangerous,” Schloss writes in her book, Eva’s Story.

They were both beside themselves with unspeakable joy. His very presence, she says, strengthened her “faith” and “determination to pull through”, yet, she was saddened by his emaciated appearance in his stripped prison attire. He said that he was working as an office manager in a timber factory and that her brother, Heinz, was doing all right.

After enquiring about her mother, her father requested that Eva bring him cigarettes, which he would exchange for favours. Eva promised to return with her mother the following day.

“Somehow, we managed to be by the barrier when Pappy came the next day. I watched the reunion of my dear parents as they stood looking at each other on opposite sides of the wire, and I wiped away the tears that trickled down my cheek with the back of my hand,” Schloss recalls.

They saw one another for the next few days. Cigarettes were thrown over the fence to her father. They were sometimes spotted by the female guards, called Kappos, and were once warned by a male guard. But the joy was obliterated when by the end of the week, her father was no longer among the men who passed by the fence. And they never saw him again.

It was a grim and oppressed life for them. Eva was stalked by a young SS officer. One day while she was running an errand for a female guard, she saw him looking at her. She quickened her pace, and he did likewise. In great trepidation, she walked until she happened upon some women searching a massive pile of old clothes. She passed the women and embedded herself among the clothes. There, she waited for about half an hour until she was sure he was gone.

“To my enormous relief the soldier had given up and gone. My luck was still in. I chuckled at the thought of how comical I must have looked with my egg-head gradually emerging from a heap of clothing,” Schloss writes.

It was now June/July 1944, and the workload had got bigger. Many Hungarians were brought to the camp, and their belongings, including clothes, were to be searched for valuables. However, by August, the number of prisoners had dwindled, so there was not much to do. Eva and her mother were transferred to another camp, Aussen Komando.

There, they were among a group of women who carried and broke huge stones into smaller pieces. Frustration, hard work, and starvation caused her mother to lose weight. She was frail and thin. They were so hungry, she and Eva decided to go find food in the garbage dump. They would swap some of the food they found for other things. They were punished for this.

On the 3rd of September, after they had showered, they came face to face with the notorious Dr Mengele, known as ‘Dr Death’ for selecting people to experiment on. Eva’s mother was one of those eventually selected on this trip.

Eva screamed. Her mother rushed towards her. SS women held and beat her, but she was able to tell Eva to tell Minni what had happened before she was dragged away.

“My body started to shake uncontrollably, and my teeth chattered violently as I watched my mother, my darling Mutti, being marched away naked with others in her group … I thought it was the last time I would ever see her,” Eva Schloss recollects.