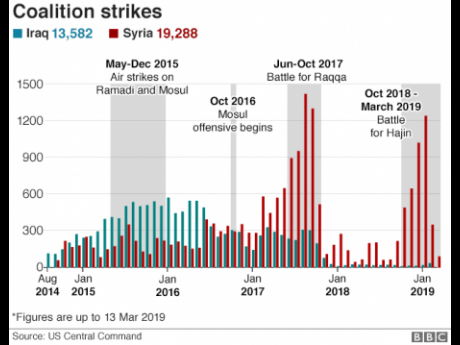 The United States-led coalition against the Islamic State (IS) group has acknowledged that it unintentionally killed more than 1,300 civilians in Iraq and Syria since 2014.

Further, the coalition disclosed, in a statement, that 34,502 strikes have been carried out since its air campaign against IS began in the region nearly five years ago.

But a United Kingdom-based monitoring group quickly fired back, charging that the estimated civilian death toll from coalition air strikes is nearly 13,000.

The US-led action began after IS took over huge areas in Iraq and Syria.

The militant group imposed brutal rule over millions of people who fell under its control and has carried out or inspired deadly attacks around the world.

The latest figure provided by the coalition is slightly higher than its previous admission eight months ago of 1,100 civilian deaths.

The coalition says it is still assessing 111 possible cases of civilian deaths.

The latest acknowledgement stands in stark contrast to the claims of human rights and monitoring groups, which say the actual death toll is many times higher.

Last month, an investigation by activists concluded that more than 1,600 civilians were killed in coalition attacks on the Syrian city of Raqqa alone during a five-month campaign to oust IS in 2017.

Raqqa had been the de facto capital of the jihadists' self-proclaimed "caliphate".