Volunteerism is our passion – Senior citizens 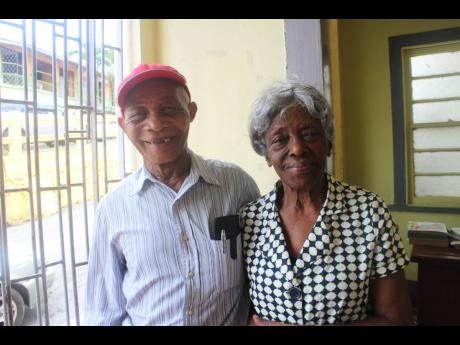 Eighty-three-year-old Mavis Gregory-Williams and 82-year-old Joseph Jolly, for more years than they can count, have been giving of their time and efforts to ensuring that their brothers and sisters around them live a fairly comfortable life.

A volunteer at the Friends in Need Organisation in Mandeville for decades, Gregory-Williams said her life’s goal is giving back.

“When I come here in the days because I know water is short, the first thing I do is fill up what I can with water, so when people come here they have water to use the bathroom. Being at Friends in Need makes me feel as though I just don’t exist, but that I am here for a purpose,” she explained.

The retired nurse, who once worked in hospitals in several parishes, including Mandeville, said though she now lives in Connecticut, USA, her role of bettering the lives of her fellowmen still stands.

“It is something I have been doing all my life and I don’t stop because I live away. I walk on the road all the time and see street people who are sick and I take them to the hospital. The needs are many and even the talks I have been hearing about putting a ban on groups that feed people is nonsense. I hope those who make it illegal to feed these people will start feeding them legally,” she said.

With humble beginnings, this selfless woman said it is through her life struggles that she has come to know the power of kindness.

“I grew up in St Andrew. I was the only child for my mother and she was not gainfully employed. She used to make roseapple baskets and sell them and sometimes she would do domestic work, so I do understand what sacrifice is and I have learnt to appreciate kindness.”

Gregory-Williams, who has two adopted children, said she made sure to instill within them a spirit of giving from a very early age.

“It is a given. I had to teach them how to share with those less fortunate. One is a doctor and she would give it all if she had it. My children are really selfless individuals,” she affirmed.

Meanwhile, Joseph Jolly said he is a jolly man by name and nature and sees helping in situations that require his assistance a no-brainer.

Originally from Hanover, the 82-year-old, who also volunteers at the Friends in Need Organisation, said nothing can stop him from doing the Lord’s bidding.

“If there is something here that needs to be done, I will be doing it. I am a churchman and through that I help tons of people. I see young men on the street and I take them to the mental health clinic for their monthly injections and see to it that they get their baths and get a trim,” he said.

He said a major problem in Jamaica is that people don’t accept responsibilities, which increases the needs and reduces the number of those who help.

“Take, for example, the man who influences a woman and gets her pregnant. He has no intention to become a father and the poor woman alone cannot manage the full responsibilities, that is where distress and need for help comes in.” he said.

He added, “The Bible said you are to love your neighbour as thyself, and your neighbour is everybody you come across, the needs are out there and I must make the necessary sacrifice. I rear chicken and when I kill, what I don’t give away, I sell and use some of the money from that to help whoever I can.”

Jolly said his only wish is that he had a vehicle to widen his reach.

“If I had a transport, I would stretch out more because, as I said, people out there need help, but in the meantime, I do what I can,” he noted.