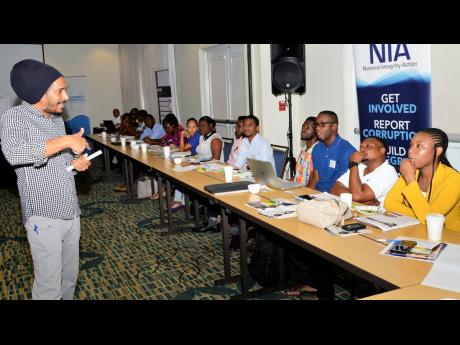 Ian Allen/Photographer
Allan Bernard (left) of USAID addresses youth during a National Integrity Action training seminar on youth crime prevention/reduction strategies and human-trafficking mitigation. The seminar was held at the Courtyard by Marriot hotel in Kingston on Saturday, June 1.

Representatives from at least 10 youth groups across Jamaica working in programmes to mitigate youth and domestic violence as well as human trafficking yesterday held a day-long seminar at the Courtyard by Marriott hotel in Kingston to coalesce around solutions.

The session – which was put on by the National Integrity Action (NIA) with the help of USAID, Canada, and Transparency International – was the second such seminar and the culmination of efforts by youth groups in different communities working to stem violence against young people.

“It was their idea. The only thing that we are doing is guiding, facilitating, providing training and technical expertise, financing, which is why you have so many persons coming on board now,” Jamie-Ann Chevannes, youth outreach officer at NIA, told The Sunday Glea ner.

GIVING THEM A VOICE

She said that many groups felt disenfranchised and that they had no voice, but NIA has stepped in to provide them with a platform.

“The young people are the ones to carry out the projects in their various communities. We have ordinary youth groups and political youth groups [including Young Jamaica and the People’s National Party Youth Organisation]. Generation 2000 (G2K) did not respond, but we wanted all these youth groups to know that whatever your political affiliations, if you come together and work, people will take notice and support your initiative,” Chevannes told The Sunday Gleaner, shortly after NIA Executive Director Professor Trevor Munroe gave the opening remarks.

Munroe urged the youth to speak about violence, criminality, and corruption, adding that Jamaica was among few countries in the world where individuals were free to speak their minds.

“I want to remind you that your predecessors as youth leaders in the late 1970s were the ones who led in so many milestones that Jamaica achieved at that time, milestones which left so much of the world behind us … ,” Munroe told the group, which numbered around 30 at 10:30 a.m.

Among those accomplishments were the inclusion of elected student representatives on the school boards and the formation of students’ councils.

Munroe urged the youth to unite despite differences, as in coming together, they could defeat anything.

He said that many of the national leaders and icons they have read about started activism at their age, including former Governor General Sir Howard Cooke and former prime ministers Hugh Shearer, Michael Manley, and Edward Seaga, as well as other activist leaders in the country who started in their 20s.

“ … Brothers and sisters from both parties and no party are summoned today to build on the successes of the past and to more effectively find solutions to the challenges of the present,” Munroe said.