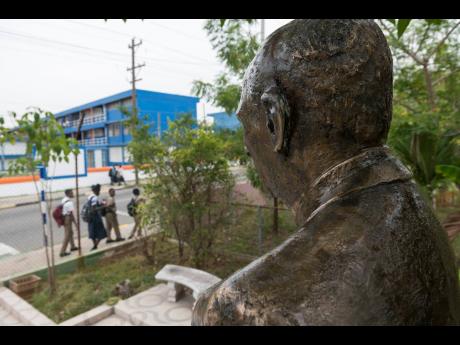 Gladstone Taylor
Gladstone Taylor/Multimedia Photo Editor The bust of Edward Seaga almost fatherly overlooks students as they walk past a monument at the entrance to Tivoli Gardens, West Kingston, on Tuesday, May 28. Seaga passed away on his 89th birthday last week.

This is the third in a series of articles on Edward Seaga.

E dward Seaga is well known for his many accomplishments – the architect of national prosperity in the Independence decade and the Herculean recovery in the deliverance decade; the social uplift programmes of two different administrations; the encouragement of our culture through Jamaica Festival and for the repatriation of the mortal remains of Marcus Garvey.

He famously erected the financial infrastruture of our developing nation through 10 different financial institutions, such as the development bank, the stock exchange, and the Agricultural Credit Bank. The Urban Developmemt Corporation (UDC) was the force behind the redevelopment of the foreshores of Kingston, Montego Bay, Ocho Rios, and the creation of a new tourism experience in Negril. Seaga built a new town in Portmore.

All the foregoing make him incomparable and unforgettable in the sweep of our history since adult suffrage, but there is one regard in which his efforts have escaped the notice of Jamaicans, and that is his tireless pursuit of equal rights and justice in Jamaica and the world. He won the crucial battle for electoral reform in 1979. When the Electoral Advisory Commission (EAC) was established, he created a mechanism to ensure fairness in broadcast media through the Media Commission (1986), secured the removal of political influence from public-sector appointments, and presented the Charter of Rights as his final gift to the people of Jamaica.

In the wider world, he cooperated with international organisations dedicated to the advancement of democracy, joined forces with the United States to liberate Grenada in 1983, and played a pivotal role in bringing down South Africa’s racist regime and in securing the release of Nelson Mandela from 27 years of detention.

The 1976 general election is infamous for widespread electoral fraud. On June 19, Prime Minister Michael Manley declared a state of emergency to combat rising political violence, he said, and to deal with forces that were plotting to overthrow his government. The December election was marked by widespread fraud and the detention of JLP candidates and constituency organisers in an effort to politically annihilate the JLP.

A post-election enquiry revealed that the story about subversion was a tale concocted between PNP General Secretary D.K. Duncan and a petty hustler name Albert Robinson to justify the emergency, and behind it all was a diabolical purpose that went beyond one single election. It was an attempt to so corrupt the electoral system, to so intimidate and harass the Opposition, as to ensure victory after victory for the ruling PNP on the same pattern established by Forbes Burnham in Guyana.

It was an attempted ballot box coup. After the electoral system was further abused in by-elections in 1978, the JLP decided that it would take no further part in elections until the system was reformed. Michael Manley mightily resisted, but in the face of the determined JLP campaign, international exposure and a collapsing economy, he surrendered in 1979 and agreed to remove the electoral system from political control by placing the conduct of elections in the impartial hands of the EAC and, thereby, ensure that future elections would give a true reflection of the will of the people.

The next major advance in the cause of democracy came in 1993. The general election of that year was again so tarnished by fraud and the partisan behaviour of policemen that Seaga refused to name opposition members to the Senate until the Government agreed to the development of a Charter of Rights. The charter would not only to restrain electoral malpractice, but even more so make the rights of all citizens safe from abuse by the state or agents of the state. The charter would also create mechanisms to give effective redress for the abrogation of rights. It was drafted by a joint select committee of the Parliament, passed by both Houses, and was embedded in the Constitution in 1993. Apart from the so-called middle-class rights of free speech, free assembly, and freedom of worship were added social rights such as the right of the citizen to humane treatment by public authorities, the right of the child to protection and education, and the right of all citizens to enjoy a healthy, productive, unpolluted and undegraded environment.

Knowing that rights become meaningless unless there are mechanisms that can offer redress when rights are breached, Seaga suggested the creation of a new office, the public defender, to be the advocate for the humble citizen in any case against a public official.

Where an MP or civil servant ignored the ruling of a court where abuses of rights had been proved, the public defender would initiate a process of impeachment that would remove the offending official from office.

Seaga expressed this hope in his autobiography: “Politics must lay the foundations of justice by correcting the ills of a society divided by the fight for … scarce benefits … and it must seek to improve the lives of the poor and vulnerable … . With deeper political maturity and broader improvements in the economic base, the day might come when the plural society of the two Jamaicas with little understanding of each other will blend into one.”

Seaga came to power at an epic moment in history when the world’s democratic parties were pushing back the hitherto-dominant international socialist parties and the end of the Cold War was in sight. Within a few years, the Soviet Union would collapse, Germany would be reunited, and there would be a worldwide retreat from socialism. With the weak-willed Jimmy Carter as US president in the late 1970s, the Socialist International believed that the future lay with the believers in one-party rule as opposed to the believers in popular rule.

Where the Caribbean was concerned, the proud boast was, “Nicaragua 1978, Grenada 1979, Jamaica 1980,” but the JLP’s victory in 1980 put an end to the socialist advance in the region. Seaga then allied the JLP with the International Democrat Union (IDU), the worldwide grouping of democratic parties, and he became the head of a regional Caribbean Democrat Union (CDU). In October 1983, the strength of the international democratric alliance was tested in the island of Grenada.

In October of that year, Grenada’s socialist revolution turned on itself and the more vicious faction murdered Prime Minister Maurice Bishop and his Cabinet. As the island stood on the brink of chaos and irresolute regional leaders suggested that no action be taken until more information became available, which is the coward’s excuse for inaction. Seaga, along with Dominica’s Eugenia Charles, acted courageously to join American forces to invade and liberate Grenada and expel a Cuban force.

The voluble leftists in the region and the international community condemned what they claimed was a breach of international law and a misuse of force against a small nation state. But the people of Grenada, the people best entitled to pass judgement, welcomed the Americans and Jamaicans with great rejoicing.

In 1985, the international effort to end apartheid in South Africa had reached a critical point. After more than a decade of international sanctions, some of which the apartheid regime had managed to evade, its international apologists began to advocate relaxation. Edward Seaga, in two landmark addresses, one to the United Nations in 1985, and the other to the 1987 Commonwealth Prime Ministers’ Conference, called on the free nations to tighten the screws on South Africa and bring the regime down.

Where all previous offensives had been focused on trade and sporting relations, Seaga argued that the most effective course would be an attack on the value of the South African rand. This, he said, would bring a harsh reality home to the business community and make them exert force on the political directorate.

At the Commonwealth Prime Ministers’ Conference in Vancouver in 1987, Britian’s Margaret Thatcher became the lead apologist for South Africa, but she was completely routed when Seaga produced a forensic analysis that showed how the South African economy was being ravaged by the attack on the rand. The South African regime broke under the financial pressure, Nelson Mandela was released from Robben Island, and a people long held hostage in their own land began to breathe the air of freedom.

In July 1992, Mandela visited Jamaican to say thanks for the support over the years and for Seaga’s crucial 1985 and 1987 interventions.

The next article in this series will record Seaga’s beautiful tribute to the visiting Nelson Mandela.

Edward Seaga was, therefore, not only a brilliant economic manager, not only a man who cared deeply for social justice, he was as well a local and international champion of freedom and democracy.